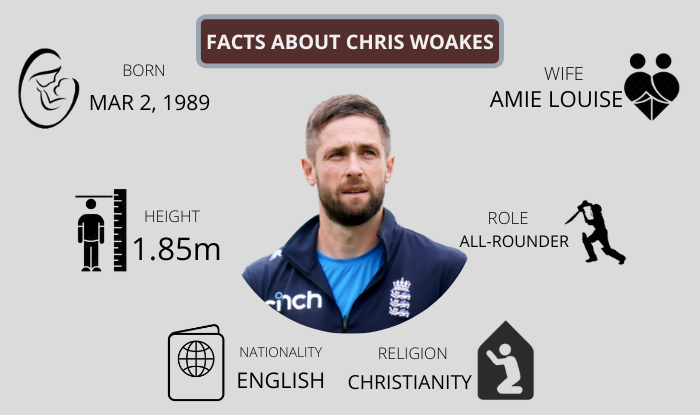 Chris Woakes is a right-arm fast-medium bowler and English international cricketer who plays for the country’s Test and ODI teams. He plays for Warwickshire in domestic cricket. Woakes was part of the England squad that won the 2019 Cricket World Cup.  He rose to prominence when he took 9 wickets in the 2012 ICC World Twenty20 tournament held in Sri Lanka.

Christopher Roger Woakes was born on 02 March 1989 in Birmingham, England. Chris attended Barr Beacon Language College in Walsall from 2000 to 2007. He began playing cricket when he was seven years old with Aston Manor Cricket Club. He played for Warwickshire’s under-15 and under-17 from 2004 to 2007.

During the 2013-2014 seasons, he played for Willington and Sydney thunders.

On 21 June 2016, he became the highest run-scorer in an ODI against Sri Lanka.

Woakes was bought by Kolkata Knight Riders in the 2017 IPL auction and very next year Royal Challengers Bangalore bought him. In April 2019, he was named to English’s squad for the 2019 Cricket world cup. In the 2021 season, he was retained by Delhi Capitals. He made his last test debut on 24 March 2022.

As of 2022, Woakes’ net worth is $8 million. He has endorsement deals with big sports brands.

Woakes is married to Sara Lonsdale, and the couple doesn’t have any children.