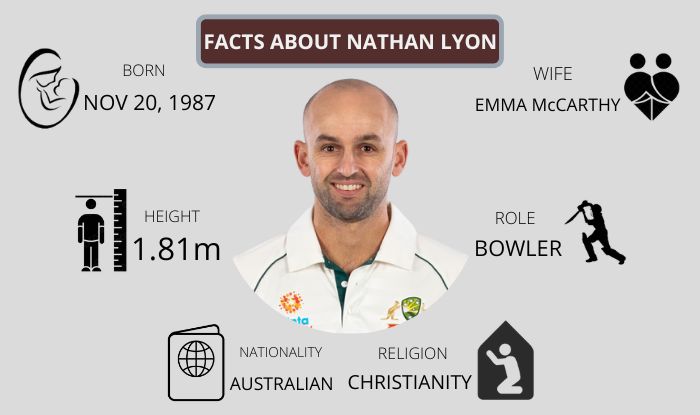 After a protracted hunt for a reliable spinner in the years following Shane Warne, Australia eventually got what they were seeking in 2011 when they selected a groundskeeper from rural New South Wales. A skilled and excellent off-spinner was none other than Nathan Lyon. He serves as one of the AUS test team’s permanent members.

Nathan was born on November 20, 1987. Steven and Bronwyn Lyon are his parents. He has a brother as a sibling. Brendan Lyon is his brother’s name. Under the direction of coach Mark Higgs and John Davison, he and his brother relocated to Canberra where they played grade cricket for the Australian Capital Territory.

Australian cricketer Nathan Michael Lyon was born on November 20, 1987. He plays domestic cricket for New South Wales and made his Test debut in 2011. Lyon is a lower-order right-handed batter and off-spin bowler. When he was a teenager, Nathan Lyon relocated from Young to Canberra, where he went on to play for the under-17s and under-18s representative teams of ACT Cricket. By the end of the 2013 Ashes series, he had solidified his spot in the team, and captain Michael Clarke couldn’t overlook him for any of the Tests during the rematch Ashes series in Australia.

Later, Lyon represented South Australia in both the Australian domestic limited-overs competition and the Sheffield Shield. He was chosen to represent Australia A in Zimbabwe that same year, and while there, he amassed 11 wickets in the tri-series, earning him the title of player of the series. The Adelaide Strikers have signed Nathan Lyon to participate in the Big Bash League’s debut season. Every time the two have played together, he and Adam Zampa have established a strong relationship with their clean style of slow bowling.

Lyon was the top wicket-taker in the 2010–11 Big Bash League with 11 to his credit. After dismissing Kumar Sangakkara in his Test debut against Sri Lanka, Lyon became the third Australian and seventeenth international player to take his maiden wicket off his first ball in Test cricket. In late 2013, he became the sixth Australian off-spinner to reach 100 Test wickets.

He also recorded a 5-wicket performance in the same game. As an Australian off-spinner, Nathan holds the record for most wickets taken. In 2015, he broke Hugh Trumble’s record of 14 wickets. Lyon became the first Australian off-spinner to win 200 Test wickets when competing against Sri Lanka in the middle of 2016. Since then, Lyon has been a mainstay for Australia in red-ball cricket, surpassing the great Hugh Trumble’s total of 141 wickets in 2015 to become the country’s most productive Test off-spinner.

Lyon went on to become the sixth Australian to reach the 300-wicket plateau in Test cricket in 2017, earning the rightful title “GOAT” (greatest of all time) from his teammates.

Nathan Lyon has outstandingly maintained his wealth. Working in sports, Nathan Lyon has amassed a sizable following and has a sizable number of followers on the most popular social networking site. Nathan Lyon’s net worth is thought to be around $4 million. His principal occupation as a cricket player has contributed significantly to his riches.