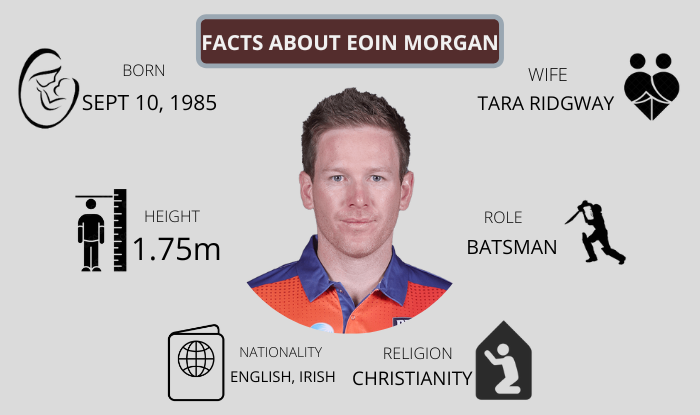 Eoin Morgan is a famous Irish cricketer. Currently, he is representing both the Irish and English teams at the international level. He is a middle-order left-handed batsman and famous for free stroking. He plays for English tests, Twenty20, and one-day internationals (ODI).

Eoin Morgan was born on 10 September 1986 in Dublin, Ireland. In his early teen, he used to play hurling and develop his skills as a good batter. During this time, Morgan represents the Irish youth team at the under13, 15, and 17 levels.

In 2004, he was selected for the Under19 world cup to represent the Irish team at the age of 17. Two years later in 2006, he was selected as a caption of the Ireland team where he finished as the second-highest runner in the tournament.

In May 2019, he became the most capped player in ODIs for England surpassing Paul Collingwood.

In the 2020 IPL auction he was bought by Kolkata knight riders but he didn’t retain his position in the next season. After that in April 2022, Morgan was bought by London spirit.

The English cricketer is earning a good living from his profession. As of 2022, Morgan’s net worth s $1.4 million. He has different advertising deals with popular sports brands.

Eoin Morgan was married to Tara Ridgway on 03 November 2018. The Couple is blessed with a baby boy, named Leo.

Morgan’s height is 5ft 9in.

Eoin Morgan was married to Tara Ridgway on 03 November 2018.