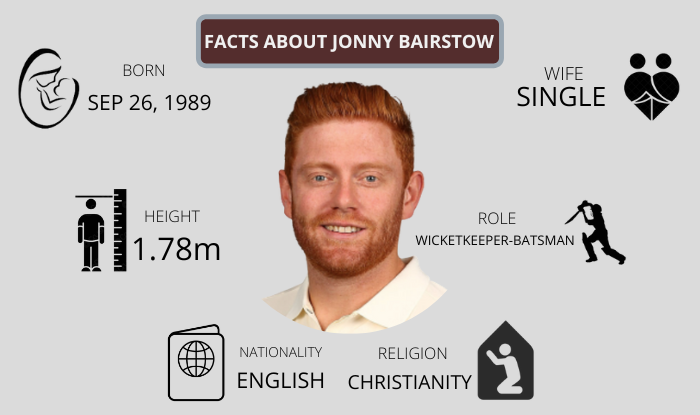 Jonny Bairstow is an English cricketer who represents England internationally and plays for Yorkshire. He is right-handed wicketkeeper batsman.

Bairstow was born on 26 September 1989 in Bradford, Yorkshire. He is the son of former England wicket-keeper David Bairstow and the half-brother of former Derbyshire player Andrew Bairstow.

He showed his interest in cricket when he was in school and got a cricket of the year award from Young Wisden school.

He made his one-day International and Twenty20 debut in 2011, and very next year he made his test debut.

His tour to South Africa in 2015 proved to be a stepping stone for his career where he scored his maiden test century.

In 2016, Bairstow as a wicket-keeper has twice claimed nine dismissals in a test match, first against South Africa and second against Sri Lanka. After two years in 2018, he became the first English batsman who made consecutive three centuries in ODIs. In December of that year, he was bought by Sunrise Hyderabad. He was part of the English team that won the 2019 cricket world cup.

During the 2021-2022 seasons, Bairstow was bought by Punjab Kings in an IPL auction.

Jonny Bairstow is unmarried yet and has no girlfriend.

As of 2021, Jonny Bairstow’s net worth is $8 million. He has sponsorship deals with reputed sports brands.

Jonny Bairstow is unmarried yet and has no girlfriend.