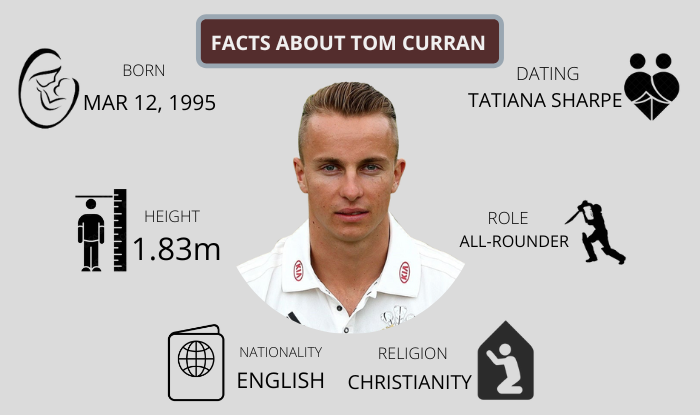 Tom Curran is a professional English cricket who plays internationally for all formats. Currently, he plays for Surrey cricket Club at the domestic level. Curran is a right-arm fast-medium bowler and right-handed batsman. He was part of the England squad that won the 2019 Cricket World Cup.

Tom Curran was born on 12 March 1995 in Cape Town, South Africa.  It was the former Surrey captain who saw his talent in school cricket and Surrey invited Curran to play for the second XI. A couple of years later, Curran made his first-class debut.

In 2012, he made his debut for Surrey against Essex. In June, Curran was named in England’s Twenty20 International (T20I) squad for their series against South Africa in 2017.

In December 2019, Curran was bought by the Rajasthan Royals, the same year 2019, his name came into the squad for the ODI world cup. He was bought by Delhi Capitals in the 2021 IPL auction, in February 2021.

Tom is dating Tatiana Sharpe who is a socialist and author. They didn’t marry yet.

Tom Curran is dating Tatiana Sharpe. The couple doesn’t have any plan of marriage yet.