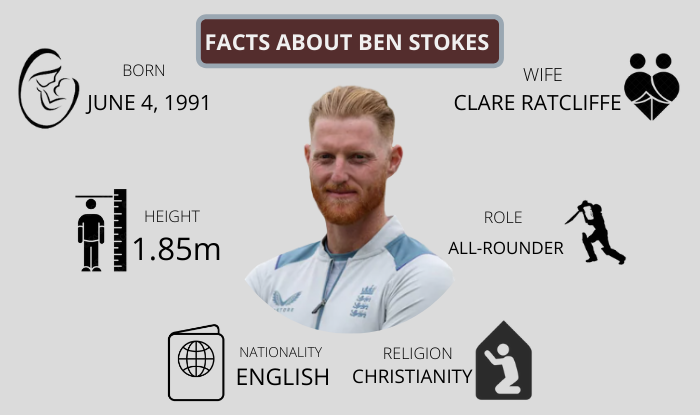 Ben Stokes is an English cricketer who is the current caption of the English test team and plays for the English One-day Internationals (ODIs) and twenty20 (T20) international team. Stokes is a left-handed all-rounder middle-order batsman and right-arm fast-medium bowler.

Ben Stokes was born in a Christian family on 4 June 1991 in New Zealand. His father’s name is Gerard stokes and his mother’s name is Deborah Stokes. He moved to England with his family when he was 12.

Stokes started his career with a one-day debut in April 2009 for Durham. That time he also played in two youth tests against Bangladesh.

In August 2011, Stokes started his first ODI debut against Ireland and also made his first T20 debut against West Indies on 25 September. On 2 January 2015, Stokes joined Australia’s Big bash league.

As Stokes was born in a christian family, he also has adopted the same religion like his parents.

Ben Stokes is married to Clare Ratcliffe. They married in 2017 and have two children.

If you have nay other question about the English skipper, please let us know, your feedback will be welcomed.