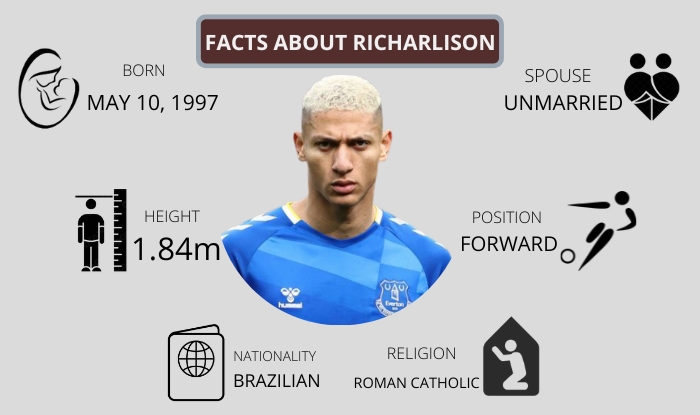 Richarlison (full name: Richarlison de Andrade) was born on 10 May 1997 in Nova Venécia, a Brazilian community in Espirito Santo. He not only plays forward for Premier League team Tottenham Hotspur but also for Brazil’s national team. He has made it to where he is today after a tremendous journey.

His primary position on the field is center forward. He usually engages his teammates from different wide positions. He has good running ability but lacks the creative flair that most Brazilians have. Despite this, he is still a solid player.

The Brazilian player is the eldest among his siblings. He belonged to a middle-class household. His father was a stonemason, and his mother worked as an ice cream vendor to meet their expenditures. Thanks to their son’s success in life, his parents’ career has since transformed. Andrade’s parents raised him to have high moral standards. His parents were the early supporters of their son’s profession, and they have had a significant impact on his life.

He said in an interview that he made money by selling chocolate and ice cream as a child while his companions sold narcotics. Richarlison never decides to lead a life of crime. He was satisfied with the simple things in life and worked hard to achieve his goals.

A sad event occurred while he was 14 years old. He was playing on the streets of his hometown when a drug lord and thug targeted him. He raised his gun’s muzzle and pointed it at Andrade’s forehead. The Brazilian was then threatened in many different ways for encroaching on his drug-dealing domain.

Father: Antônio Carlos Andrade is the name of his father.

Mother: Vera Lucia is the mother of the young player.

Siblings: He has four younger siblings.

Spouse and children: Brazilian forward player still has his career as his top priority. He is unmarried. He is, nonetheless, so close to Dr. Flavia Cristine.

He is a follower of Christianity.

While on vacation and training, the famous footballer is seen driving several luxurious vehicles. A Range Rover and a Mercedes Benz are among his automobiles.

The elusive winger’s life transformed when he met entrepreneur Renato Velasco, who recognized his talent while watching him play for the local club Real Noroeste’s juvenile squad.

He got training at América Mineiro’s youth system before starting his professional career. He received training through Real Noroeste’s youth program as well.

How did Richarlison start his professional career?

On July 4, 2015, against Mogi Mirim, this young soccer player made his professional debut for the Brazilian professional football team, America Mineiro. He contributed to his team’s 3-1 victory by scoring his first goal in that game. He scored nine goals in 24 games for America Mineiro.

Richarlison later signed with Fluminense, Brazil’s best team, after showcasing his talent by tallying nine goals in 24 games for Mineiro. He had scored eight goals for Flamengo in 12 games.

In 2017, Marco Silva, the manager of Watford, persuaded him to reject Ajax and sign with the Hornets after a direct phone call that was sufficient to secure a five-year contract. He participated in every Premier League game after joining the league.

He moved to Everton in July 2018 to reconnect with his former manager Silva after only one season. Richarlison scored twice in his first match and finished the season tied with Sigurdsson for the club’s most goals.

Everton extended his contract for another five years in December 2019, and in July 2022, Tottenham Hotspurs manager Antonio Conte saw him as an essential addition to his team, and the two sides agreed to a long-term agreement.

He joined Spurs on a five-year deal which started on July 1, 2022, after leaving Everton. The period of his long-term contract with Tottenham will end in 2027.

The player’s net worth is estimated to be $31.5 million in 2022. He recently made a £60 million deal to Tottenham in the Premier League. His yearly wage has not yet been made public by the club. Richarlison’s former team was Everton. His annual salary at Everton was £5.7 million. His market value right now is €48 million. At €65 million, it peaked in March 2020.