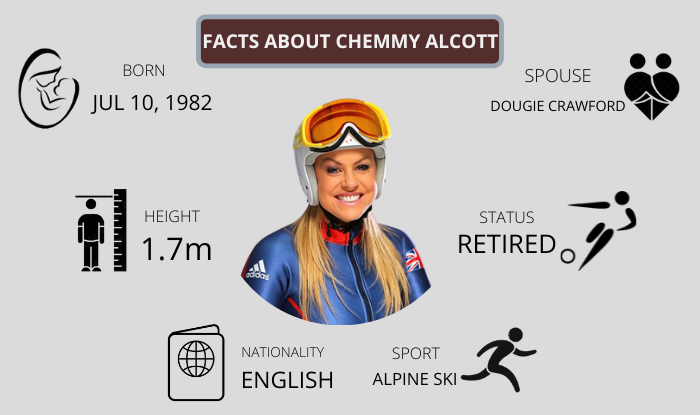 Chemmy Alcott is a popular English former alpine ski racer. She is considered one of the best English female athletes. Alcott competed in all disciplines of the alpine ski.

The professional profile of the great English female athlete is enriched with great achievements. She won seven overall Senior British National Alpine Ski Championship Titles. After the season 2014, she announced her retirement.

Chemmy Alcott was born on 10 July 1982 in Hove, England. She was an extraordinary child who started skiing at the age of 18 months when she was on a tour to France with her family. She participated in the first competition at the age of three.

After winning a village ski championship in 1993, she became a member of the British Junior Alpine Team in 1994.

Her journey of success started in August 1997 when she took part in her first FIS competition at Coronet Peak, New Zealand. Details of her senior British national alpine ski championship titles are given in the below table.

The above table indicates about the brilliant career of the former British alpine ski racer. Her junior career is also full of great successes and achievements.

What is Chemmy Alcott’s Net Worth?

As of 2022, Chemmy Alcott’s estimated net worth is $4 million. She has been in some brand advertising deals during her professional career.

During her injury period in 2009, she has been working as a guest commentator in the various women’s world cup events.  Her climb of 2008,  Mount Kilimanjaro along with fellow ski racers raised a $30,000 fund for the international humanitarian organization Right to Play.

Who is Chemmy Alcott’s Husband?

Chemmy Alcott’s husband’s name is Dougie Crawford who was her fellow ski racer. The couple tightened their knot in 2014. She now uses the name Chemmy Crawford-Alcott.