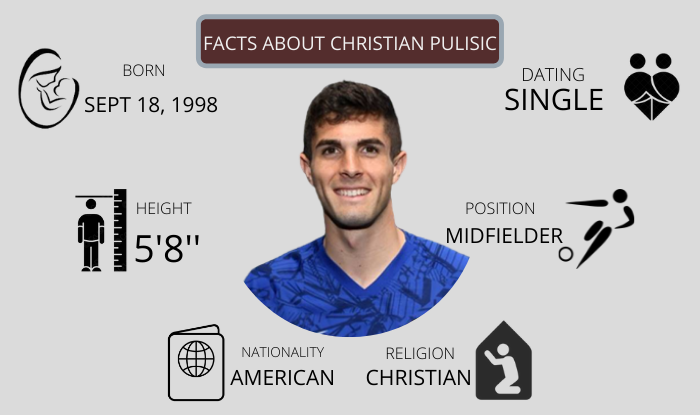 Christian Pulisic is an American professional soccer player who is nicknamed ”Captain America” by his fans and other players. Pulisic is a talented midfielder who already has played for world-class football clubs. Currently, he is playing for the Premier League football club, Chelsea. He is also a part of the United States National soccer team.

Christian Pulisic joined Chelsea in 2019 against a considerable transfer fee of $73 million making it the most expensive North American player of all time.

Pulisic was born on 18 September 1998 in Hershey, Pennsylvania, United States. His parents also played soccer during their university time and his father was a professional indoor soccer player. Christian Pulisic spent most of his childhood in his hometown.

Because of his parents’ interest in soccer, it was very easy for him to learn something from home. He started playing football at the age of 7 for a local town team.

As a child football player, Pulisic played for different football academies and teams before his five-day trial in Chelsea’s Cobham base in 2010.

Christian Pulisic started his professional career with Borussia Dortmund in 2015 at the age of 16. The club signed him for their U17 team. He played for U19 the same year and then his performance made him a hot choice for the club.

At the start of 2019, Pulisic joined Chelsea FC, that deal made him the most expensive American player.

Pulisic is also a hot choice for the United States’ national football team. He scored his first hat-trick for the national team in 2022 in a FIFA world cup 2022 qualifying match.

Christian Pulisic is the most expensive American soccer player right now. He has sponsorship and endorsement deals with a number of sports brands. As of 2022, Christian Pulisic’s estimated net worth is $14 million.

According to some news, Pulisic is dating a beautiful girl who has been seen with him in different places. He also shared her picture on Instagram but didn’t tell her name.

If you have any authentic information about the dating life of the American footballer, please let us know in the below comment box.

He is 1.77m tall, which is an ideal height for a professional soccer player, neither too tall nor too short.