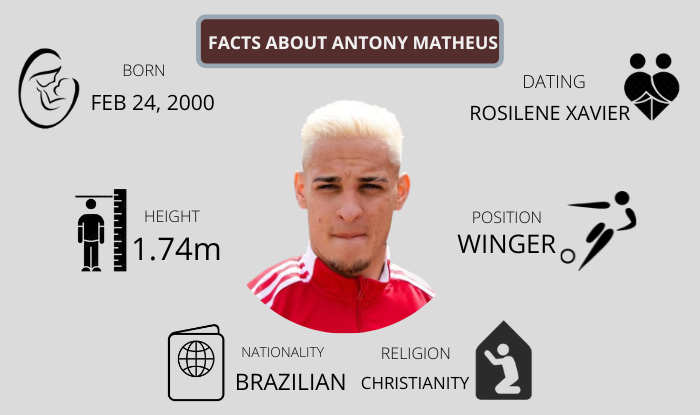 Antony Matheus (Full name: Antony Matheus dos Santos ) is a 22 years old Brazilian professional soccer player. He was born on 24 February 2000 in Osasco, Sao Paulo, and has Brazilian nationality. Matheus is a young and gifted right winger. He can also play as a striker or from the left wing if necessary.

His exceptional abilities have made him a top target for several top clubs in Europe. The young player plays for the Dutch club Ajax and the Brazilian national team. Antony has graduated so Paulo’s youth development program, made 52 appearances for the team, and netted six goals.

The young Brazilian football hero was raised primarily by his parents. The player has a sister and an elder brother. Their parents settled in Brazil after emigrating from Portugal. Like many outstanding athletes, Antony became passionate about it as a young child. He envisioned himself playing professional football in front of a raucous crowd. His parents also ensured he received a foundational education while pursuing a career.

Mother: Cremilda Prudencio, Matheus’ mother, always supports her son. She has seen promoting breast cancer awareness. Antony’s mother is a fighter and transferred her kid the same traits that have helped him grow into one of the world’s top football players.

Siblings: He has two siblings, a sister and a brother named Emerson Santos.

Spouse and children: Antony dos Santos is married to Rosilene Xavier. The player is a proud father of a son. In November 2019, the couple welcomed a newborn boy into the world. His son’s name is Lorenzo Dos Santos.

The birth of his child served as the inspiration for Antony Matheus’ tattoos. He has many tattoos on his arm. The number 39, the word love in italics, a delineation of a young child tossing a football on the beach, and a massive pocket watch are all the tattoos on his right arm.

Sao Paulo’s talented player is one of the most devoted Christian football players.

In 2010, at age 10, Antony Matheus became a part of the Sao Paulo Football Club. In 2018, he was a member of the Sao Paulo team that won the J League Challenge Cup and was the best player in the competition.

He is a right winger for the team. On September 26, 2018, Antony received a promotion to the Sao Paulo senior team. He made his professional debut in the 1-1 tie between Sao Paulo and Gremio.

On February 23, 2020, Ajax announced that the club had acquired Antony for £13 million. The Brazilian winger signed a five-year deal with the four-time Champions League winner. He scored his first goal for Ajax in a 1-0 win over Sparta Rotterdam.

The Brazil Under-23 team that triumphed in the 2020 Olympics match in Japan comprised Antony. Tite called Antony to the senior Brazilian national squad after he performed admirably with the Olympic team. As a replacement in a World Cup qualifier against Venezuela, he made his debut for Brazil. In his first game, he scored, and Brazil won 3-1.

Antony’s estimated net worth as of 2022 is $1.5 million. Football is his primary source of income, and he appears to be well compensated. His current club, Ajax, pays him $1.2 million annually. Antony’s market worth is estimated to reach 35.5 million pounds. According to https://www.statista.com/, Antony was one of the top Dutch soccer league players with the highest market transfer value as of 2021.