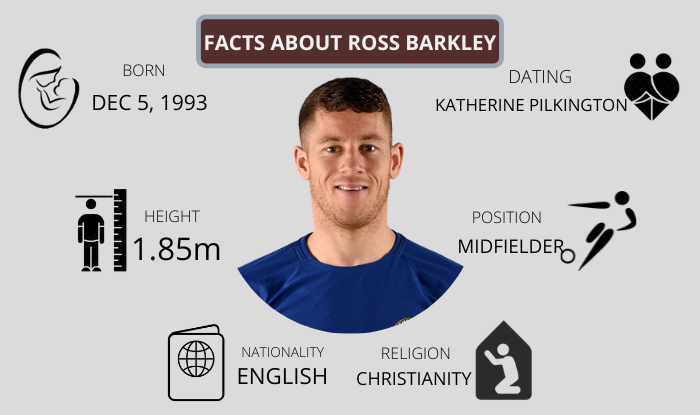 Ross Barkley is a popular English professional soccer player. He is an attacking midfielder and is considered to be one of the most talented and fast midfielders. Barkley plays for England’s national football team and popular Premier League club Chelsea FC. Here we have interesting information about Ross Barkley’s age, height, net worth, girlfriend, religion, and more about his personal and professional life. Have a look.

Ross Barkley was born on 5 December 1993 in Liverpool, England. He showed his interest in football at a young age and played locally. At the age of 11, he joined Everton and played with youth for the upcoming years. As of now in 2020, his age is 26 years.

After spending an initial career with Everton till 2018, Barkley joined Chelsea FC in 2018 for £15 million. He is now a part of the Chelsea squad and has improved a lot in his magical skills. It is an honor for him that he is compared with football legends by experts.

Barkley’s style of play has inspired team managers and he was called up to the senior English football team in August 2013.

As of now in 2021, Ross Barkley’s net worth is estimated at around $13 million. The young midfielder has advertisement deals with some of the most brands.

Nothing much is known about the personal life of a previous Everton star, but he has been spotted with an Instagram model recently. She is most probably his girlfriend.

The young English star football Barkley is one of the most talented and powerful attacking midfielders in the football world. Here you have read about Ross Barkley’s age, height, net worth, girlfriend, religion, and more about his life.

If you have found any missing information please let us know. We welcome your feedback and comments.

Leave a Review about Ross Barkley in a Comment