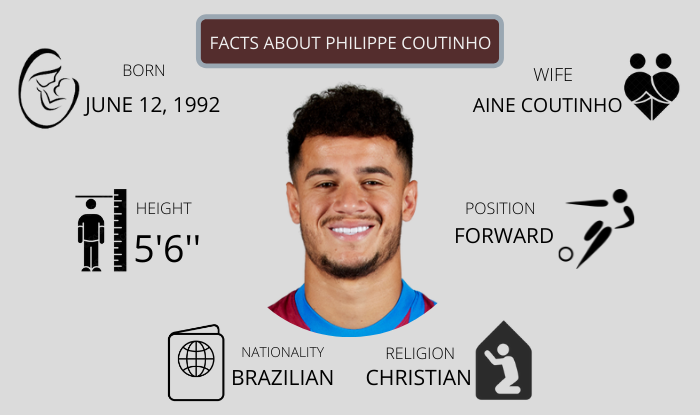 Philippe Coutinho is one of the most famous Brazilian footballers right now. Currently, he is playing for the Premier League club Aston Villa. Till season 2021-22 he has been on loan from La Liga club FC Barcelona. He plays as a winger or attacking midfielder. News about his permanent move to the Premier League club Aston Villa is now on official sourcecs.

Philippe Coutinho was born on 12 June 1992 in Rio de Janeiro, Brazil. As a child, Coutinho was a shy kid who likes to live alone. He started playing football with friends in the streets of his hometown. He developed his skills and talent in street football and later he decided to join the game professionally.

In 2008 when he was purchased by the Italian football club Milan, Coutinho was 16 years old. He played for Vasco for two years on loan.

After he turned 18, Coutinho moved to Inter Milan. In the season 2011-12 he joined the La Liga club Espanyol on a loan. He made his debut for the club on 4 Feb. 2012. As a young player, Philippe Coutinho has struggled a lot in making his space in the playing eleven. He returned to Milan after expiring the loan contract.

In January 2012, English Premier League’s club Liverpool agreed on a deal of 8.4 million pounds as the transfer fee for the young player. As a result of the long-time contract, Coutinho played for Liverpool for six seasons before his transfer to FC Barcelona on 6 January 2018.

In the 2018-19 season, Coutinho played for FC Barcelona and in the very next season, he was loaned to Bayern Munich FC. He returned the next season and was again loaned in the 2021-22 season to Aston Villa.

Philippe Coutinho and Aine Coutinho first met at a friend’s party. They were in a first sight love, the couple tighten the knot in 2012 by marring Anie in Brazil. The happy couple is now a complete family with two daughters and a son.

According to many reliable sources, Philippe Coutinho is a Christian. He has been celebrating his goals by making the cross.

Answers to Your Queries

1. How Old is Philippe Coutinho?

2. How tall is Phillipe Coutinho?

Coutinho is not a much tall player. His reported height is 5.6 feet.

4. Who is Phillipe Coutinho Wife?

Coutinho is married to his longtime sweetheart Aine Coutinho. The couple married in 2012 and now they have three children.