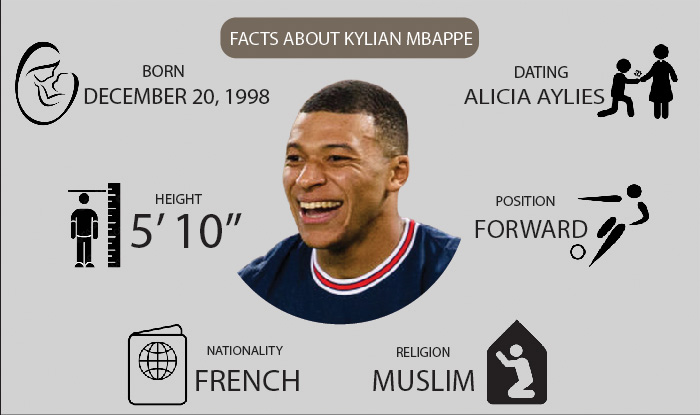 Kylian Mbappe is a young talented French professional football player. His height is 5 ft 10 in. He plays as a forward for the Paris Saints German football club and also for his national team. Mbappe made his professional debut in 2015. At a young age, he is one of the most expensive footballers of the current time.

Kylian Mbappe started his senior career with a popular Ligue 1 club Monaco. At the start of his career, he won the title of Ligue 1 young player of the year.

Mbappe also won another graceful award for the Golden Boy award. This achievement made his market value more prominent and other clubs started accessing him for transfer. With a transfer worth €180 million he joined PSG. With this deal, he became the second most expensive transfer and most expensive teenager ever. He is doing very well with his PSG team.

Kylian Mbappe made his senior debut for the national France team in 2017. Like his club career, the start of his international career was also magnificent and wonderful. He became the first youngest football player who scored a FIFA world cup goal.

Throughout the tournament of the FIFA world cup, the 2018 French team remained wonderful and we looked great at teamwork. France won the tournament and Mpabbe scored a beautiful goal in the Final game. So his international side became an idol for many youngsters.

As a child player and football fan, Mbappe was a fan of Cristiano Ronaldo who is undoubtedly one of the best football players on the planet. Like his favorite football player, he also became a hardworking player and the time came he was on the same list as his idol.

About his struggling days, he says “I did not have the moments of so-called normal people during adolescence, like going out with friends, enjoying good times.”

Mbappe is the second teenage player who scored a world cup final goal.

He proudly donated all FIFA WC 18 earnings to a children’s charity by saying that he should not pay for representing his country.

In his first football club Monaco he was the youngest player in the history of the club.

As for 2019, he is the second most expensive player in football.

He came from an athlete family, both of his parents and brothers are athletes.

In a short career of time, Mbappe has a long list of titles and awards. He has been nominated for iconic football awards that some football players retire within their dream.

In the mega event of FIFA World Cup 2018, he won the title of Best Young Player Award.

In the same year 2018, he won the title of French Player of the Year

Mbappe is one of the most followed young players of the era. In the modern age of social media, we can easily judge the popularity of a celebrity through his/her social media followers. Kylian Mbappe has rapidly growing social media profiles day by day.

What is Mbappe to you? a source of inspiration? just a football player? No as a youngster he is an idol for many struggling footballers around the world. The things that made him able to enrich the above long list of titles and awards are his hard work, constancy, and passion. The young master has had a great career till now and seems to be one of the bests in the future. Must give your feedback in below comment box.

Some of the most asked queries about Mbppe are answered here.

How Old is Kylian Mbappe?

As of 2022, Mbappe is 23 years old. He is one of the youngest footballers who achieved the glory of greatness in this age.

How Tall is Kylian Mbappe?

What is Kylian Mbappe’s Religion?

According to many reliable sources, Kylian Mbappe is a Muslim.

Who is Kylian Mbappe Dating?

According to the latest updates, Kylian Mbappe is dating Alicia Aylies. She got fame after winning the Miss France title in 2017.

What is Kylian Mbappe’s Net Worth?

As of 2022, Mbappe’s net worth is $80 million making him one of the richest young footballers.