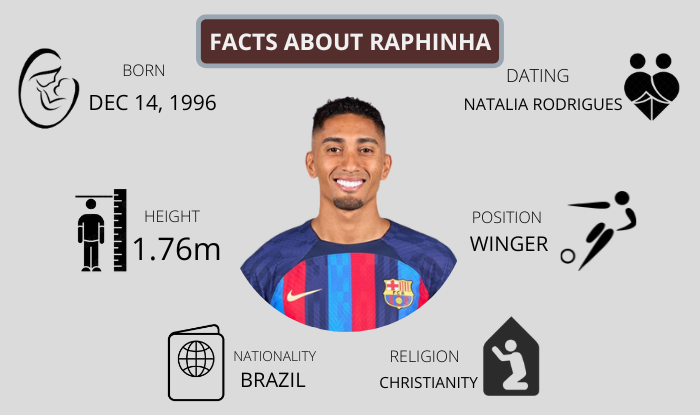 Raphinha (Full name: Raphael Dias Belloli) is a professional Brazilian soccer player. He plays as a winger for FC Barcelona and the Brazil national team. He was born on 14 December 1996 in Porto Alegre, Brazil, and raised in Restinga.

His father was a musician and used to play music on the sidelines. The player had a challenging life. He used to share a bedroom with his family members and a pet. He struggled to pay for travel expenses and occasionally didn’t have enough food to eat. As far as the nationality of his parents is concerned, his mother is Brazilian while his father has Italian nationality.

The Belloli family is known in Restinga for developing soccer talent. That well-known surname belongs to our very own Raphinha. The Bellolis prioritize football as their profession.

He is the luckiest of his generation in their athletic family. The Brazilian footballer has experienced the highest success in the noble game. His ancestors are also from Restinga, which contains 27 different shanty communities. Ilhota, a well-known slum district, is located there. Raphael never attended a traditional school. He got his soccer education from Monte Castelo.

Father: Maninho Belloli is Raphinha’s father. His father worked so hard to give his kids the necessities of life.

Mother: There is not much information about his mother except that she has Brazilian nationality.

Girlfriend: The Brazilian player is unmarried, but he is dating Natalia Rodrigues, his gorgeous girlfriend with whom he has a long dating history. In January 2021, on the occasion of Natalia Rodrigues’ birthday, he made an exceedingly beautiful proposal that resulted in the couple’s engagement.

Raphinha began his professional football career with Imbituba. He later joined Avai in 2014, and started playing 2014 at age 18 with Avai’s under-20 squad in the Campeonato Brasileiro Serie A. He joined the Portuguese team, Vitoria Guimaraes, on February 2, 2016. On March 13, 2016, he made his club debut against Pacos Ferreira. He scored his first goal on August 20, 2017, in a 2-0 victory over C.S. Maritimo.

On September 14, 2017, he made his UEFA Europa League debut against Red Bull Salzburg in a 1-1 tie. He also won the Vitoria Guimaraes Breakthrough Player of the Year award.

Raphinha makes money through football, but his Contracts, bonuses, and endorsements also provide the majority of his revenue. His estimated net worth is €9 million as of 2022, and his annual income is £3.2 million. He is worth about €40 million in the market.