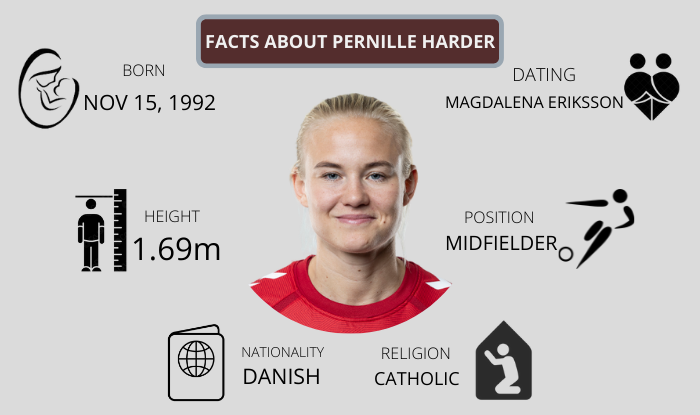 Pernille Harder is a Danish professional soccer player who plays as an attacking midfielder for the Danish national female soccer team and one of the most popular football clubs, Chelsea FC.

Pernille Harder was born on 15 November 1992 in Ikast, Denmark. She started playing football at a young age for a local team. At the start she was not sure about her professional career, later she decided to play the world’s most popular sport professionally.

Pernille Harder was a talented and quick learning player as a child footballer. She joined the Swedish club Linköpings FC and started developing her professional skills day by day.

In 2016, Harder signed a contract of two and a half years with VfL Wolfsburg. She played four seasons for the club and won all Bundesliga seasons. Furthermore, she also played in two Champions League finals but remained unfortunate to win the big title.

In 2020, Pernille Harder joined FC Chelsea and signed a three years contract. This deal became iconic because it made Harder the most expensive female soccer player.

On the national side, Harder has been a remarkable player on both the youth and senior team sides. She has been scoring regularly for her team. The young female footballer made her senior debut in 2009.

Harder’s transfer to FC Chelsea made her the most expensive female soccer player. This transfer boosted her net worth to the next level. As of 2022, Pernille Harder’s net worth is $2.8 million.

The personal life of the Danish professional female soccer player has been criticized by many thoughts of society. This is because of her relationship with Magdalena Eriksson, her teammate at Chelsea. Things got out of hand when their picture of sharing a kiss went viral on social media.