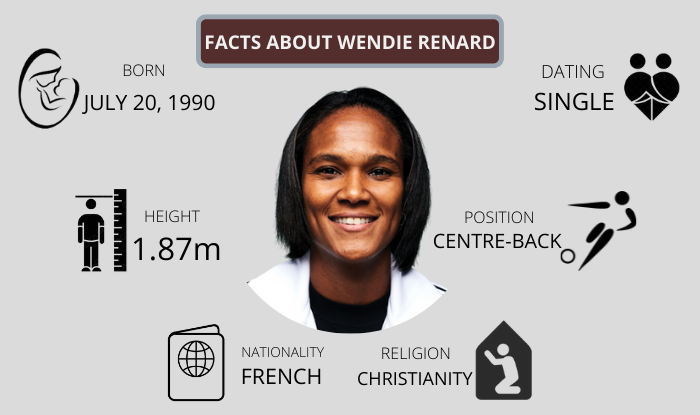 Wendie Renard is a French professional soccer player who plays as a center-back for the French national female soccer team and Division 1 Féminine club Lyon. She captains both of her teams. Renard is one of the most title-winning female soccer players who has won 14 French League titles.

Wendie Renard was born on 20 July 1990, in Schoelcher, Martinique. She is the youngest among her four sisters. Renard started playing football with her sisters and friends at a young age.

As a child footballer, Renard went through a lot of struggles where she faced failure many times. Her father died of lung cancer when she was eight years old.

At the age of 15, she was able to take her place on a trail in Lyon. Later, she moved permanently to the city to develop as a professional football player.

Wendie Renard joined the most successful European division of women’s football club Lyon in 2006. Throughout her professional career, she played for the same club where she got iconic titles and successes. Some of her achievements for Lyon are:

Being captain of one of the most celebrated and successful football clubs, Renard is paid highly. As of 2022, Wendie Renard’s net worth is $1.8 million. She has signed advertising and endorsement deals with some sports brands.

Nothing much is disclosed about her personal life and dating history. According to our research, Wendie Renard is most probably single or has a secret relationship.

She loves to visit beaches and other enjoyable spots. Football is her passion and she wants to decorate her profile with many other titles.