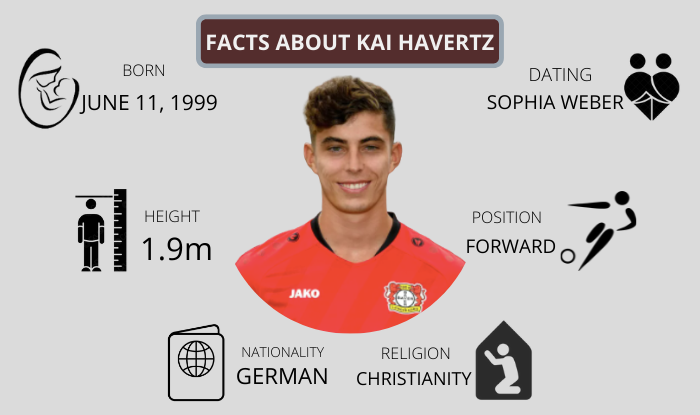 Kai Lukas Havertz, an attacking midfielder for Premier League club Chelsea and the Germany national team, was born in Aachen, North Rhine-Westphalia, Germany, on 11 June 1999. His nickname is Alleskonner which means Jack of all trades. One of the brightest emerging stars in Germany, Kai Havertz, has lived up to the surrounding anticipation. He is one of the few athletes playing in the modern era who may be known as a generational talent. The German star debuted in 2016 as the club’s youngest player after graduating from Bayer Leverkusen’s development academy.

Kai Havertz hails from an athletic family. Havertz had to finish high school before focusing on his football career to appease his mother. His grandfather assisted him in developing his football career. His family resided in Mariadorf, a district of Alsdorf. Later, the family relocated to Aachen. His father used to play football, but he quit after the amateur level. Instead, he decided to join the police. Havertz is his family’s second son and the third child overall. He has a close relationship with each of his family members.

Kai Havertz, a star for Chelsea, leads a moral life away from the field and is surrounded by his soft Golden Retriever and, strangely, a donkey!

Havertz appreciates animals and the natural world. The German actor spends his leisure time cuddling up to his pets, which may surprise some people considering that he owns a donkey. Baloo is his dog, and it appears that Havertz only ever blogs about his dog. The animal-loving celebrity claimed that after moving to England, he adopted the puppy.

His favorite car is a Mercedes Benz. He owns many other cars that are Audi Q7, BMW X5, Range Rover, and Mercedes Benz AMG G63.

Havertz has joined the effort to donate money to help those people in his community who were devastated by the recent major flooding that occurred in several areas of Germany and Belgium, which also hit his city of Aachen.

The extraordinary young man has donated his bespoke boots and $200,000 to Red Cross Germany, which will help to restore the damage to many families in his community. It shows that he is mature beyond his years.

Havertz is a talented midfielder who is good with both feet, big, can head the ball, and can play in many midfield positions. The young man is known as an “Alleskönner” (person who can do everything) due to his adaptability and varied skills.

Havertz made his international debut for the German national football team in August 2018. He gave his club debut for Bayer 04 Leverkusen in 2016 and Chelsea F.C. in 2020.

Kai Havertz is one of the top-ranked players on the German national football team by market value. His current net worth is $9 million and has a market value of $86 million as of June 2022.