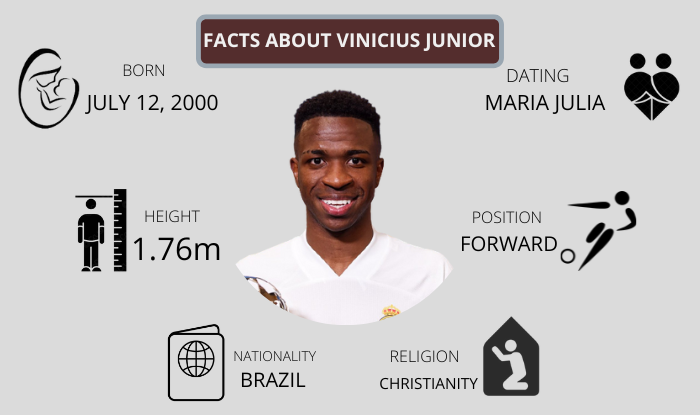 Vinicius Junior (full name: Vinicius José Paixo de Oliveira Junior) is a Brazilian professional soccer player who is currently playing for Real Madrid and Brazil National team. The player was born on July 12, 2000. His birthplace is Sao Gonca, a state of Rio de Janeiro in Brazil.

Vinicius is a versatile player who typically plays not only as a left winger but also as a striker. His impressive attributes include rapid pace, superb dribbling abilities, exceptional agility, ball handling skills, athletic prowess, tremendous power, speed, and flair.

Junior also benefits from physical prowess and tremendous power. To score goals and provide assists, he enjoys running at defenses and outlasting his opponents in one on one situations.

The evangelical revolution in Brazil is centered on Sao Goncalo (a place where Vinicius was born), while Guanabara Bay’s filthy waters are right next door. Only locals with a low socioeconomic status would reside here. Vinicius also hailed from a poor household where it was difficult for his parents to put food on the table for their children.

Vini has had a passion for soccer since he was little. His parents then registered him at the soccer academy. When he was only five years old, in 2005, he joined his first Brazilian Flamengo club. He lacked interest in academic education after joining the club. He loved to play video games as a kid. The Brazilian forward used to prefer the Barcelona squad more when playing video games.

Mother: The name of his mother is Tatiana Vinicius.

Siblings: Vini has two brothers and a sister. One of his brothers’ name is Carlos Vinicius. He also plays soccer, but with the PSV team as a striker.

Girlfriend and Children: Maria Julia Mazali is the girlfriend of Vinicius Junior. She is a well-known Instagram influencer. She was born on April 30, 1995, and gained fame after participating in a Brazilian Reality show named on vacation with the Ex. Maria was widely recognized even before she met junior. Vinicius denied reports of a relationship earlier, but the Brazilian newspaper “Lance” later revealed his association with the Instagram star.

Although the exact number of Junior’s children is uncertain, it seems that he is the father of two.

Vinicius Junior started his career in Escolinha Fla Sao Goncalo, Canto do Rio Futsal which is a famous youth club located in Sao Goncalo. He studied futsal at Flamengo School in Niteroi between 2007 and 2010. Jr. went through a futsal trial in 2009 at age nine. He passed that trial but had to return after a year because he was younger by the time he gave trial. Later on, Junior decided to play football instead of futsal. He completed Flamengo’s football trials in August 2010. Later, to reside nearer Ninho do Urubu (Flamengo’s training center), he traveled to Abolicao with one of his uncles.

Numerous European football clubs like Barcelona, Real Madrid, and the Brazilian national team were drawn to his tremendous skills. He entered into a contract with Real Madrid in 2018. Vini Jr established a record for being the most expensive player under 18.

Vinicius earns money from football, sponsorships, and endorsements. He earns a good income from these sources. The average worker would have to work for many years to make what Vinicius Junior makes in a month. His current net worth is 32 to 34 million Euros and has a market value of almost 70 million Euros.