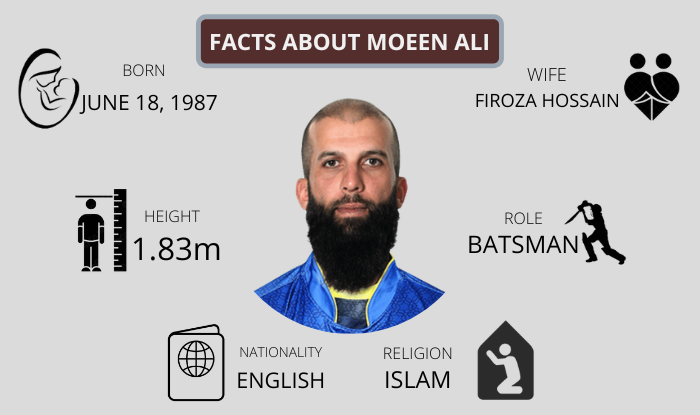 Moeen Ali is an English cricketer of Pakistani descent who plays county cricket for Warwickshire and England. He is an all-rounder left-handed batsman and off-spin bowler.

Ali made his first One day International (ODI) debut against West Indies on February 28, 2014. In 2015, he represents England in all formats of the game. He was named one of the Cricketers of the Year in the 2015 Wisden Cricketers’ Almanack.

Before joining the Chennai-based franchise, Moeen was bought by the Royal Challengers Bangalore (RCB) in the previous seasons of the IPL in January 2018. He was named in the English squad for the 2019 cricket world cup in April 2019.

He was drafted by Multan Sultan at the 2020 PSL draft for Pakistan Super League. During the 2020-2021 seasons, he won the man of the match award in the second T20 against Pakistan for his best performance as an all-rounder. After that, he was released by RCB and bought by Chennai super king in the APL auction.

At the age of 21, Moeen Ali got married to Bangladesh-born Firoza Hossain, who is now an expatriate in England. After a few years of their marriage, the couple was blessed with a son named Abu Bakr, and a daughter named Hadiya.