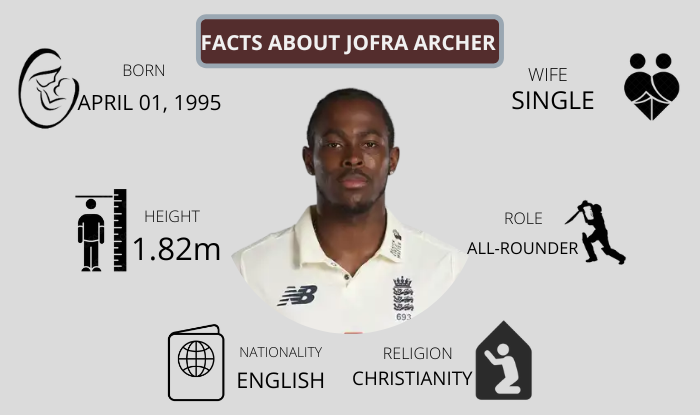 He is a right-handed batsman and right-arm bowler.

Jofra Archer was born on 01 April 1995 in Bridgetown, Barbados. He started his professional career as a first-class cricketer in 2019. During his teen, he represents the Under 19 West Indies side. He also became a member of Hobart Hurricanes, Rajasthan Royals, and Sussex Country club.

In July 2016, he made his first debut for Sussex. Jofra got global fame due to the big bash league in Australia where he gave a magnificent performance.

During the 2017 season, he represented Hobart Hurricanes and performed very well. In that year, he was bought by Rajasthan Royals in an IPL auction. In 2018, he was signed by Quetta Gladiator Pakistan super league draft and made his PSL debut against Karachi kings.

In May 2022, a back stress fracture and two elbow injury operations hampered his progress in a big way, and by the time he got back to peak fitness.

Jofra Archer is not married yet and doesn’t have a girlfriend. Archer hasn’t disclosed any private relationship, if you have any valid information about his personal life and relationships, please let us know.

Jofra Archer is not married yet and doesn’t have a girlfriend.