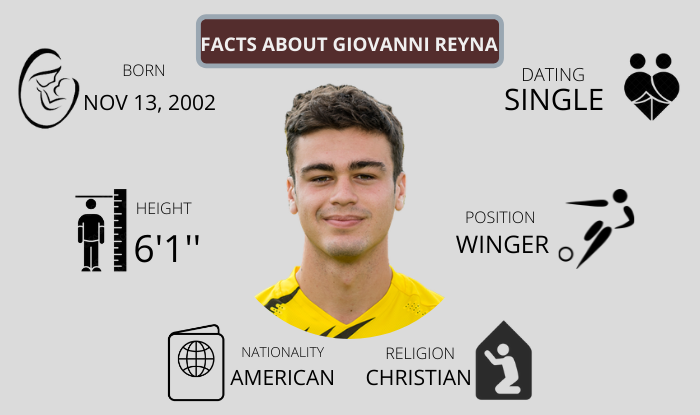 Giovanni Reyna is a professional soccer player from America who plays as an attacking midfielder. He is a young talented footballer who started his professional career in 2020 after joining the Bundesliga club Borussia Dortmund.

Reyna also plays for the US national men’s soccer team. Hopefully, he will be a part of the squad playing in the FIFA world cup 2022 in Qatar.

Giovanni Reyna was born on 13 November 2002, he is one of the youngest players in the squad of both his club and national teams. His place of birth is Sunderland, England, where his family was living before moving back to the United States.

Giovanni was five when his father moved to the United States. He started playing football for the New York City FC at a young age. He has been playing for the team until his move to Germany to join Bundesliga.

Giovanni started his professional career with the Borussia Dortmund in 2020. Before the season 2022-23, Borussia announced that Reyna will wear the number 7 jersey from the next season.

The young footballer is happy to have his favorite number jersey which has been the number of many football legends such as Cristiano Ronaldo.

Giovanni Reyna has represented the United States on the different youth levels, he was first called up to the US senior soccer team squad in 2020. In his second international game, Reyna scored a beautiful free-kick goal against Panama, this was his first senior team goal.

Giovanni is a young talented soccer player who is now at the start of his professional career. He has a lot of chances of getting exposure in the future. He is already earning a good living from his profession. As of 2022, Giovanni Reyna’s net worth is $0.8 million.

The American footballer is born to a soccer family, both of his parents played football and gave him a wonderful environment to become a professional soccer player.

The young footballer is now focusing on his professional career. He is most probably single and currently not dating.

According to him, Reyna is single and he is focusing on his professional career.