NHL is the most popular ice hockey league in the world, which is the most famous winter sport in North America. In this article, we have ten of the tallest NHL players ever. Height is essential and can help a player improve his potential and performance. 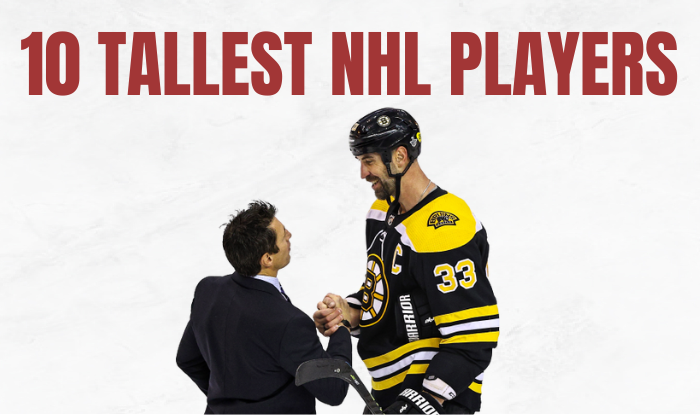 Who are the 10 Tallest NHL Players?

The tallest ever NHL players are:

The Slovak former ice hockey defenceman Zdeno Chara stands out among others because of his prominent height. He is 6’9” tall making him the tallest man ever to join the NHL.

Chara’s career is also long like his height. He has been active in the NHL from 1996 to 2022. He was picked by the New York Islanders of the NHL in 1996. Chara is also known by his nickname ” Big Z” because of his incredible height.

The 2.03m Andrej Sustr finds the second spot. He is a Czech professional ice hockey defenceman who currently plays for the Minnesota Wild of the NHL.

The long man started his NHL career in 2013. Currently, in 2022, he is an undrafted player.  His height is the only thing that makes him prominent among the other squad.

Joe Finley is an American former ice hockey defenceman who stands at 6’8” height. His professional career is listed from 2009 to 2018 but not all in the NHL. Finley played just 21 games in the NHL between 2011 to 2013.

Joe Finley spent the most career with minor leagues and ended up in 2018.

The American-born Canadian ice hockey defenceman Tyler Myers ties for the 2nd spot on the list. He is 6’8” tall which is equal to Andrej Suster and joe Finley who are 2nd on the list of tallest NHL players.

Tyler Myers started his professional career with the NHL in 2009. Currently, he plays for the Vancouver Canucks of the NHL. Tyler was picked by the Buffalo Sabres in the 2008 NHL draft.

Scott played college hockey for the Huskies where he completed his degree. He also met his future wife Danielle during his college days.

The Canadian professional ice hockey defenceman Jamie Oleksiak is 6’6” tall. He currently plays for the  Seattle Kraken of the NHL. Because of his height, he is nicknamed “Big Rig”.

Jamie Oleksiak started his professional career in 2012. He was drafted by the Dallas Stars in 2011. Oleksiak’s youngest sister, Penny, is a competitive swimmer.

Derek Boogaard was a Canadian professional Ice hockey defenceman. He played in the NHL from 2006 to 2011, where he was drafted by the Minnesota Wild in 2001. He was also 6’7” tall.

The 6’7″ tall American former ice hockey defenceman Hal Gill played for 16 seasons in the NHL for different teams. Currently, he is a co-host of a TV show.

Gill was drafted into the NHL in 1997 and ended up his career in 2014 after playing 16 successful seasons as an ice hockey defenceman.

The Canadian former ice hockey defenceman, Christopher Breen is one of the tallest NHL players ever. He started his professional career with NHL in 2010 and ended up in 2020.

Breen is 6’7″ tall and shares the third place on the list with others 6’7″ tall.

Apparently 10th but actually sharing the third position on the list, Brian Boyle is an American ice hockey center. He is the only one on the list among nine defencemen.

We have discussed only the height of the NHL players in this article, which is why we didn’t provide many details about their professional careers.

Who is the Tallest NHL Player in History?

Zdeno Chara tops the list, he is the tallest one who ever played in the NHL. His 6’9″ height made him the big one in history.