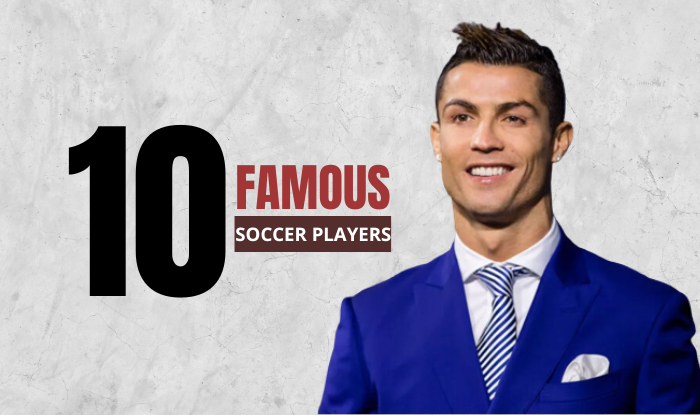 Football always remained a passion for millions of people in world history. The number of followers of the incredible sport grew day by day because of its attractive setup and big events on the international level.

Here the below list contains ten of the most popular soccer players in the world right now. These soccer players are also considered the greatest footballers of the current era. There are a number of football legends who can not be ignored but here we are focusing on the players who are still active on the field.

Top 10 Most Famous Soccer Players in The World 2022

Sadio Mane is a well-known Senegalese soccer player who is considered one of the best footballers in the world right now. Mane, who recently joined the Bundesliga club Bayern Munich, is a great person as well in his daily life.

He is known for his adorable charity work and humble nature. With more than 30 million followers on different social media, Sadio Mane is the tenth most popular soccer player right now.

Robert Lewandowski is one of the best soccer players in the current era. He is a Polish professional footballer who has been playing for the German football club Bayern Munich for many years before his transfer to the La Liga club FC Barcelona.

Lewandowski has been underrated because of many reasons including his previous playing league and the team that remained infamous as compared to La Liga and the EPL among football fans. With more than 50 million followers on different social media, Robert Lewandowski got a place among the most famous soccer player in the world.

Marcelo is another football legend who has been underrated because of some controversies. A talented football player from Brazil, Marcelo is a forward for Real Madrid. He joined the club in 2007 and spent most of his career at the club.

Marcelo has more than 100 million followers on different social media accounts. He is one of the best and most liked football players in the world right now.

Erling Haaland is a young talented Norwegian soccer player who is considered among the best soccer players in the world right now. He joined the Premier League club Manchester City at the end of season 2021-22.

Haaland is known for his amazing football skills and powerful shots. The young football is at the start of his career with a great pace that can lead him to the height of glory in the future. Haaland is followed by more than 30 million followers on social media. He is just 22 years as of 2022.

Karim Benzema is a French professional footballer who is best known for his incredible scoring abilities. He captains Real Madrid, one of the most valuable football clubs in the world.

Benzema plays as a forward and has been amazing during the 2021-22 season where they won La Liga and Champions League title that is considered iconic soccer title.

Karim Benzema is followed by more than 110 million fans on different social media. He is the sixth most popular soccer player right now.

Yong and fast-rising talented footballer, Kylian Mbappe is a French professional soccer player who is considered one of the best ever football players in the country. Mbappe is the hero of the 2018 world cup where he scored the winning goal for France.

On the club side, Mbappe plays for League 1 club PSG. He has a leading role at the club. Mbappe is followed by 100 million fans on different social media. His rapidly growing fans following gives him a green signal about his great future ahead.

Mohamed Salah is an Egyptian professional soccer player who is considered one of the best footballers of the era. Salah is one of the most respected personalities in his country. Salah plays for the Premier League club Liverpool and captains his national football team.

One of the greatest African football players, Mo Salah is also in a race of the top three best footballers in the world right now. He has almost 100 million fans on his official social media accounts.

Neymar is one of the most famous athletes in the world right now. The Brazilian footballer is well known for his football skills and scoring abilities.

Neymar plays for PSG and Brazil national football team as a forward. He made his space in the hearts of football fans at a young age. He just follows football legends Lionel Messi and Cristiano Ronaldo in many reputed football ranking lists.

With more than 300 million fans on his social media accounts, Neymar is the third most popular soccer player in the world right now.

2nd and top in many reputed football rankings, Argentine star footballer Lionel Messi is a genius footballer who inspired the world with his great talent.

Lionel Messi is one of the greatest football players in the history of football. He is the second most followed footballer on social media. Messi has more than 500 million social media followers.

With more than 700 million fans on social media, Cristiano Ronaldo tops the list of most famous soccer players in the world. Ronaldo is widely considered one of the greatest football players the world has ever seen.

Cristiano Ronaldo represents Portugal and also plays for Manchester United in the Premier League. As of 2022, Ronaldo is 37 years old but he is still one of the fittest footballers on the squad.

Ronaldo is the most followed athlete and person on social media in the world.