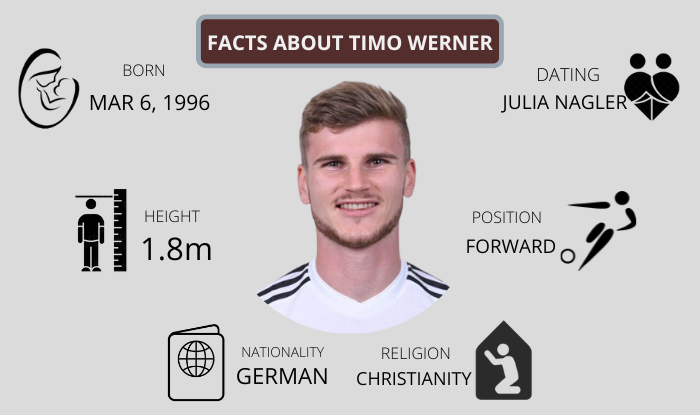 A well-known German Soccer player, nicknamed Turbo Timo, was born on March 6, 1996. The Werner family has roots in Stuttgart, the state capital of Baden-Württemberg in southwest Germany. Timo Werner is known for his rapid acceleration and pace. He began his playing career as a winger in his youth before being moved to a striker or center-forward position. He is a direct, diligent, and energetic attacker.

Werner belongs to a family that upholds excellent standards for educating children. His mother wanted him to complete high school before pursuing a football career. Timo Werner’s parents, especially his father, are regarded as the architects of his future. His father was also an amateur footballer who played as a striker for Stuttgart Kickers. Later, he became a coach for TSV Steinhaldenfeld’s junior teams.

Werner’s father taught him the value of perseverance when he was a little lad. He made his son continually run up the mountains in the early days so that he may increase his agility and stamina. Timo always wanted to impress his father because his students considered him a hard taskmaster with scary coaching abilities. After running, Werner used to ask his father if he were fast enough.

Father: Gunther Schuh, who had achieved his professional aspirations, entered coaching to help his son pick on where he left off. Timo Werner, thankfully, is now living out his father’s wishes.

Mother: Her name is Sabine Werner.

Girlfriend: He has been dating Stuttgart-based fitness model Julia Nagler. She is a year younger than Werner. She had previously attended Stuggart University.

Siblings: Werner has no siblings. He is his parents’ lone kid.

His religion is Christianity.

Timo Werner’s house is in Stuttgart, Germany. The striker has a lifelong passion for German automobiles. He prefers to dress in match shirts that match his vehicle. His preferred vehicle is still a Mercedes Benz. He enjoys watching racing automobiles and owns Audi A8, Audi Q7, BMW, Mercedes Benz C Class, and Ferrari 488 Italy.

Werner admires Mario Gomez a lot. He chose a former German striker as his role model. He acknowledged looking up to Mario, a former German international player. Playing alongside the veteran in the national squad was a unique experience for him.

On March 6, 2014, he committed to playing for VfB Stuttgart till June 2018. In May 2016, Stuttgart was demoted, which led him to sign with newly promoted club RB Leipzig. On June 11, 2016, Werner and RB Leipzig reached a four-year agreement.

In the 2016–17 Bundesliga season, he scored 21 goals, assisting Leipzig to reach the UCL for the first time in the club’s history. Werner got selected for the German team for the 2017 FIFA Confederations Cup. He was a member of Germany’s final 23-man for the FIFA World Cup in June 2018.

On August 30, 2019, Werner defeated Borussia Monchengladbach and recorded his first hat trick in the Bundesliga. Werner signed a five-year contract with EPL team Chelsea in July 2020. He debuted in the EPL on September 14, 2020.

According to market valuation as of March 2022, Werner is one of the top players for the German national football team. As of January 2021, he is also the most expensive Chelsea FC soccer player in terms of transfer value. Currently, Timo Werner has a net worth of 4 million euros. His market value right now is 65 million euros.