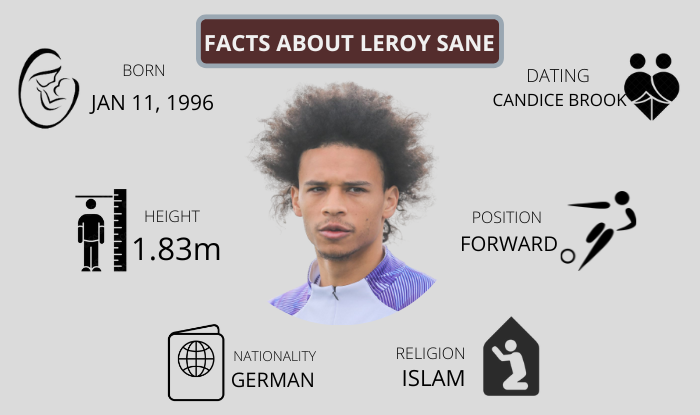 German professional soccer player Leroy Sane (full name: Leroy Aziz Sané) was born on January 11, 1996, in Essen, Germany. He competes for the Bundesliga club Bayern Munich and the German national team. He joined Bayern on July 15, 2020, and his contract with the club will expire on June 30, 2025.

Leroy Sane mainly plays as a left winger but can also play in several other positions like a right winger and attacking midfielder. The German is one of the fastest and most deftly moving attackers. He also possesses excellent finishing.

Leroy’s family has genuine athletic prowess. With Senegalese ancestry, Leroy’s father immigrated to Germany for football-related reasons. On the other side, the mother of Leroy Sané is French. She moved to Germany after being given a chance in gymnastics.

The player’s balance comes from his mother and his quickness from his father. The fortune of having two professional athletes as parents were felt by many. He was inspired to play football by his father as well.

Father: Souleymane Jean Sane was Senegalese. He played as a striker for various clubs and the Senegal national team. Souleymane was born in Dakar, Senegalese, but he grew up in France, and after joining the French Army, he relocated to Germany.

During his career, he received the most racial abuse. Every racist German called him the most unattractive man in football. He did not pay attention to these things and continued playing football humbly.

Souleymane motivated his son to play football. He significantly influenced the career of Leroy Sané. Leroy is still indebted to his father for laying the foundation for his career.

Mother: Regina Weber, Leroy’s mother, was of French ancestry but was born in Germany. German rhythmic gymnasts took home the bronze medal at the 1984 Summer Olympics.

Siblings: Sidi Sané and Kim Sané are his two brothers. Leroy’s brothers began their professional careers at Schalke 04. Kim, the older brother of Leroy, once participated in FC Koln tryouts. Unlike his younger brothers, who are all wingers, Kim began his career as a defender. Sidi is eight years younger than Leroy.

Girlfriend and Children: The American model, singer, and reality TV celebrity Candice Brook is dating the player. Rio Stella, his daughter, was born to Leroy Sané’s girlfriend in September 2018, making him a father for the first time.

When Leroy was 18, he was involved in a car accident. He was in a C-class Mercedes. Later, his father expressed regret that Leroy had purchased an automobile, but he would now learn a lesson. The player met with another accident a few months later in his Audi 8.

He follows Islam. His father was a Senegalese Muslim who came to Europe in the 1980s, so he is a Muslim by birth.

Leroy Sané has a large tattoo of himself on his back celebrating a Champions League goal against AS Monaco in 2017.

At age 5, Leroy Sané started his youth career at SG Wattenscheid 09, a former club of his father’s. Four years later, Sane went to Schalke 04, and in 2008, he transferred to Bayer Leverkusen. He went back to Schalke 04 nonetheless, and in 2014, when playing as a substitute in Stuttgart’s 3-1 loss, he made his Bundesliga debut. The German joined Manchester City in 2016. He moved to Bayern Munich in 2020. Sane made his senior debut for Germany against France in Paris in November 2015.

On December 13, 2014, he scored his season’s first goal against Fc Koln. On March 11, 2015, he beat Real Madrid FC and scored his first UEFA Champions League goal. Additionally, he replaced Julian Draxler in the 61st minute of a friendly encounter between the German national team and the national team of France on November 13, 2015, on= his international debut.

On November 15, 2018, during a friendly encounter against the Russian national team, this talented footballer scored his team’s first goal at the international level. Additionally, on November 19, 2018, in a 2018–19 UEFA Nations League game against the Netherlands, he scored his second goal for his country.

Since Sane’s transfer from Manchester City to Bayern Munich, his earnings have skyrocketed. His current net worth is 20 million euros. Regarding his market value, it is conceivable that it is high. The German is young and possesses all the necessary skills. His estimated market value right now is about 80 million euros.