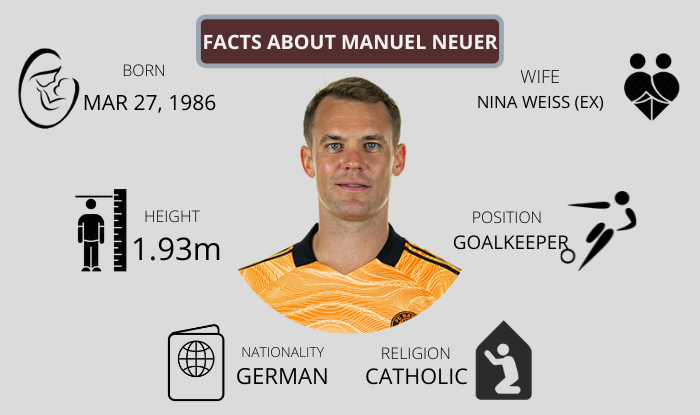 Manuel Neuer (full name: Manuel Peter Neuer) was born on 27 March, 1986.  He is a professional footballer from Germany who plays as a goalkeeper for the Bundesliga club Bayern Munich and the German national team. He is known as one of the sport’s all-time great goalkeepers. Neuer is one of the most well-liked players in the modern era of goalkeeping. Neuer has the nickname sweeper-keeper due to his playing style and quickness after breaking from his line to avoid opponents and exiting the goalie area.

His well-known handling, game reading, remarkable reflexes, shot-stopping skill, swiftness, coordination, and footwork all combine to help him effectively command his area. His talent, agility, and proficiency in this area allow his teammates to maintain a solid defensive line.

Manuel Neuer was born in Gelsenkirchen, Germany, and at the young age of 2, he began playing football. Manuel and his brother used to play in the streets of their hometown. He continued to be interested in football and eventually enrolled in Gesamtschule Berger Fled, like his hero and fellow great footballer Mesut Ozil.

Manuel, a gifted young player, made his professional debut in 1991 at age 5. He participated in the Schalke youth program and well exceeded everyone’s expectations. Manuel continued to improve because the coach started paying close attention to his game and honing his talents; by the time he was in school, he was already a goalie of the highest caliber.

Siblings: Neuer has a brother named Marcel who works as a football referee for the Verbandsliga, a division six football league.

Neuer had been in three relationships so far. His first girlfriend was Kathrin Gilch who was a hairdresser and a model. They both broke up in 2014. After splitting up, the German national team goalkeeper introduced Nina Weiss as his new girlfriend in 2015. Nina is a Berlin native who met Neuer while they were both students at the School of Economics and Law.

Neuer and Weiss exchanged vows at a church on May 21, 2017, in Tannheim, Austria. However, the pair divorced in the early 2020s. After his divorce from his ex-wife Nina Weiss, Neuer began dating Anika Bissel who is a handball player.

The Tegernsee house of the well-known soccer player is an opulent villa surrounded by native green trees. The villa is gorgeous from a distance. As per the latest news Neuer and his girlfriend, Anika Bissel, moved into a lavish apartment in the English Garden in northern Lehel. As far as his Tegernsee villa is concerned, he still owns that house.

Neuer is Catholic and grew up in a Catholic household. Additionally, Neuer’s family are active members in the church of Gelsenkirchen area.

Neuer is a player with a good heart who generously gives to charity. Even better, he runs the Manuel Neuer Kids Foundation, a charity that assists disadvantaged kids in the Ruhr region. Additionally, the charity provides young athletes with sports equipment who cannot pay for it themselves.

Manuel values simplicity. He owns fewer cars than one might anticipate though he is a fan of automobiles. He frequently appears with an Audi RS6 and a tiny Volkswagen GTI Golf.

Many people consider Manuel Neuer to be a contemporary goalkeeper. He is the most reliable and effective goalie over the decade who shows a dominant presence in the box, thanks to his height and physicality. Neuer stands out from other goalkeepers due to his ability to react to various scenarios.

Neuer began his senior career at Schalke 04 and has played his whole career in Germany. In 2006, he made his senior debut with Schalke. Neuer gained a transfer to Bayern Munich after playing for Schalke for the subsequent five seasons. He has been the Bavarians’ consistent number one ever since, and he has been a crucial member of the Bayern team that has won 26 championships in that time. The Bayern team that captured the 2019–20 European Triple Crown has Neuer as its captain.

Neuer was Germany’s first choice and was called up for the 2010 FIFA World Cup in South Africa after making his national team debut in 2009. Since then, he has participated in two World Cups and three European Championships for Germany. He received the Golden Glove at the 2014 World Cup for being the best goalkeeper on the field. In 2020, Neuer received the German Player of the Year award.

Manuel Neuer is a motivation to many aspiring goalkeepers and generates a good income from his profession. His present transfer value is $18 million, and his net worth in 2022 is $40 million.