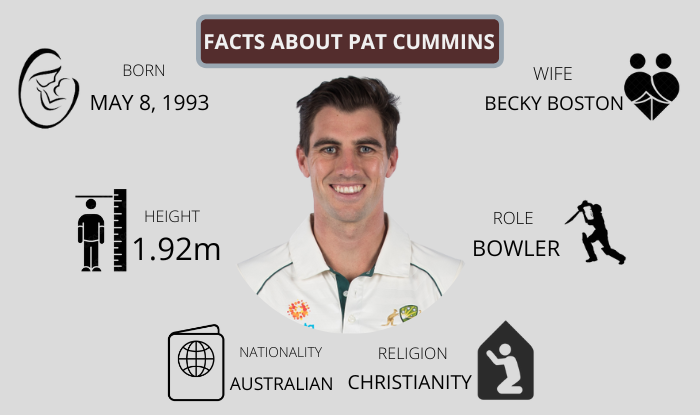 Cummins is a popular renowned bowler for the Australian team who, when necessary, can also bat well. Both Pat Cummins’ bowling motion and his hitting motion are to the right. The athlete is leading the chart in the ICC Men’s Test Bowling rankings. After a promising career start, injury setbacks almost resulted in his career decline, but he overcame all odds to claim the top slot in the ICC Test bowling rankings today. The 28-year-old has performed for his nation in every way and is one of the highest-paid cricketers in the Indian Premier League.

Peter and Maria Cummins welcomed Pat into the world on May 8, 1993, in Westmead, South Australia. He has two brothers and two sisters, Tim and Matt Cummins and Laura and Kara Cummins, among his four siblings. Cummins attended St. Paul’s Grammar School to complete his studies. Then, for his higher education, he got admitted to the University of Technology Sydney, where he earned his bachelor’s degree in business.

As a 17-year-old in the Australian domestic debut, Patrick Cummins had a significant impression right away. His outstanding performance with 3-25 in his debut T20I, his first game for his country, was regarded as impressive enough to earn him a call-up for the series against South Africa in the test match.

Cummins was a member of the Australian team that won the 2015 World Cup, however, he only participated in two games (where he fared well). He is currently the top pace option on the squad sheet because he has had full control over his health since 2017.

Although Cummins always seemed like a highly promising bowler, injuries dogged his early career. Australia put him on the Test team as a replacement for Ryan Harris during the 2015 Ashes after he overcame a stress fracture in his back; however, he was unable to participate in the match. Pat was finally able to play a Test match in 2017 when Mitchell Starc withdrew due to injury, ending a drought of more than 5 years.

The ODI series victory in India in 2019 was a huge accomplishment for Cummins, who has advanced to become the top strike bowler for the national side across all forms. As a result of his development, Australia named him as Travis Head’s co-vice-captain for the 2019 Test season.

He became the No. 1 Test bowler in the world very soon and played for the Australian team that won the first-ever men’s T20 World Cup in 2021. Pat Cummins has served as a representative for numerous teams. Since 2010, he has participated actively in the Big Bash League and Indian Premier League.

In anticipation of the 13th season of the Indian T20 League, there was a bidding war for Cummins due to his previous success. Cummins was ultimately acquired by Kolkata for INR 15.5 crore, making him the most expensive foreign purchase at the League players’ auctions.

Yorkshire, England-born Becky Boston is engaged to the world-class cricketer. After six years of dating, the couple got engaged in 2020. Australian sprinter Pat and his fiancée Becky had their first child named Albon Boston Cummins.