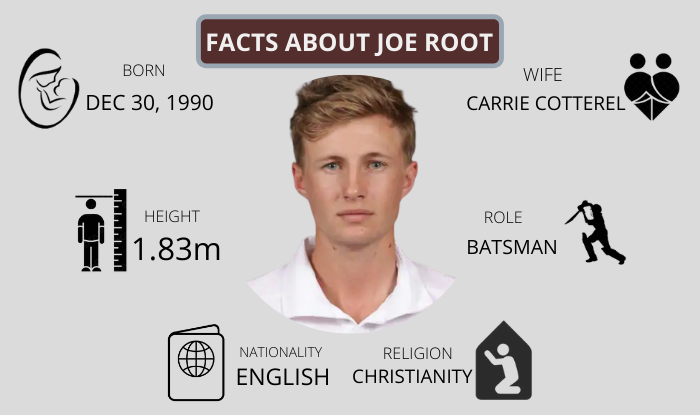 Joe root is one of the famous English cricketers, who belongs to rich cricketing background. He is the formal caption of the English test team and plays for English tests and one-day internationals (ODI).

Root was born on 30 December 1990 in Dore Sheffield South Yorkshire England. Growing up in Sheffield, he was part of a household that had a rich cricket background. His grandfather captained Rotherham CC in the Yorkshire League for several seasons while his younger brother, Billy, is a regular with Glamorgan. At the age of 15, he got a cricket sports scholarship at workshop college.

After his graduation from workshop college, he decided to join cricket professionally.

In 2007, Joe made his Yorkshire second-team debut against Derbyshire. After that, he got an opportunity in the first team in Yorkshire’s final pro40 match against Essex. After a month he was selected for the English team for the U19 cricket world cup in New Zealand in 2010 and got the man of the series award.

In 2011, he had his English Lion debut against Sri Lanka. Root established himself as a reliable batsman.  In 2012, Joe proved his worth by giving a superb performance in the English test cricket series and securing a historic win on Indian’s ground. Later, he made his twnety20 debut and was included in the ODI squad.

In the 2018-19 season, Joe is the caption of the England test team with his latest achievement being part of the English squad that won the 2019 cricket world cup.

The next year In November 2020, Root was nominated for the Sir Garfield Sobers Award for ICC Male Cricketer of the Decade and the award for Test cricketer of the decade.

Joe Root and Carrie Cotterill first met at a bar where she worked. The couple began dating before 2016 and tight the knot for two years on 01 December 2018. The happy couple is now a complete family with a son and a daughter.

Who tall is Joe Root?

Who old is Joe Root?

Who is Joe’s wife?

Ben Stokes is married to Carrie Cotterell. They married in 2018 and have two children.