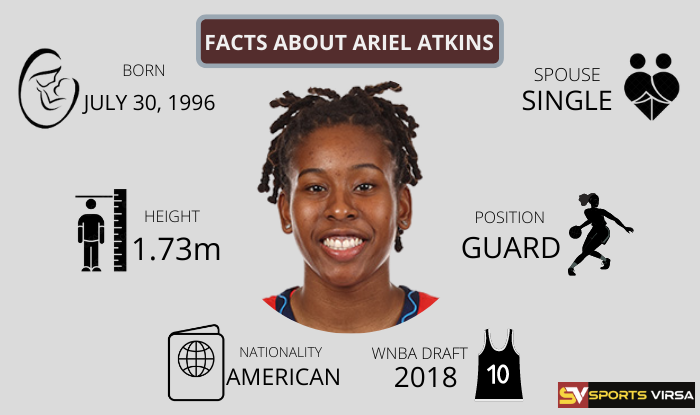 Ariel Atkins is an American professional basketball player who plays as a guard. She played college basketball for the Texas Longhorns for four years before her draft to the WNBA in 2018 by the Washington Mystics.

Here in this article we have a short detail about her personal and professional life.

Ariel Atkins was born on 30 July 1996 in Dallas, Texas. She started playing basketball at a young age. Her height was growing rapidly that became a reason for her thoughts for professional basketball.

Atkins played basketball during her school and college days. She played college basketball for the Texas Longhorns for four years.

Ariel Atkins was drafted into the Women National Basketball Association (WNBA) in 2018. From the very start of her WNBA career in 2018 she was named to the All-Defensive Second Team.

In the next season 2019, she was a part of the team that won WNBA Championship that was the first ever for her team. In her three initial seasons, Ariel Atkins was named the All-Defensive Second Team three times.

This is a great professional career start for the young basketball player. She can get the desired glory in her career ahead. We can expect her presence in the USA national women basketball team soon.

They young basketball player is at the start of her professional career. She is not very highly paid but still she got a lot from her profession. As of 2022, Ariel Atkins net worth is $1.7 million. You can expect a significant rise in her net worth in near future.

Atkins is forcing her professional career and hasn’t any love relationship. Accoring to our research she is most probably single or in a secret relationship.