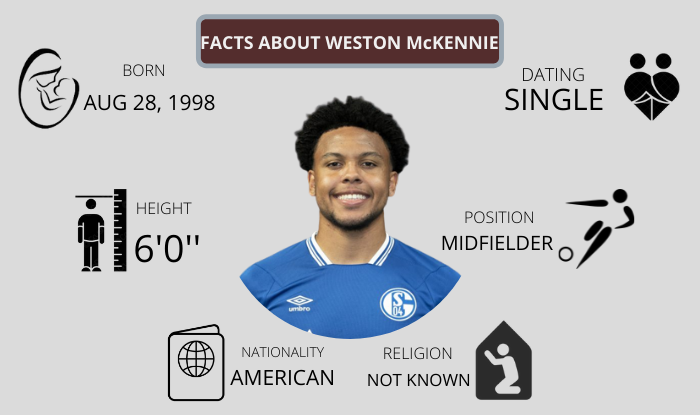 Weston McKennie is an American professional soccer player who is a versatile player having abilities to play in different positions. He plays for the national US soccer team and one of the most valuable football clubs in the world, Juventus FC.

He was on a loan to Juventus first, but later the move became permanent in 2021. Here we have a short biography and career highlights of the young American soccer player.

Weston McKennie was born on 28 August 1998 in Fort Lewis, Washington, United States. He spent most of his childhood in Germany because his father was an airforce officer who has been appointed in Germany.

McKennie started playing football at a young age for local football teams. After moving back to the United States in 2004, he joined MLS side FC Dallas.

McKennie started his professional club career in 2016 when he joined Bundesliga’s FC Schalke 04. He was promoted to the first-team squad in a year. He played for the club for three seasons before he left for Juventus FC.

The Italian champions made an announcement of Weston McKennie’s singing on 29 August 2020. This was a loan move for €4.5 million. McKennie made his debut for the club the next month of his move.

In 2021, McKennie signed a four years contract with the club for €18.5 million, plus €6.5 million in potential bonuses.

On the international side, the versatile American young soccer player has played with various US youth teams. He made his senior debut in 2017 against Portugal. His first impression was amazing where he scored a wonderful gaol against the world-class team.

The young talented American footballer Weston McKennie is most probably single. He never told about any secret relationship.

As of 2022, Weston McKennie’s net worth is $4 million. We can expect a massive increase in his net worth with his new contracts in the future.