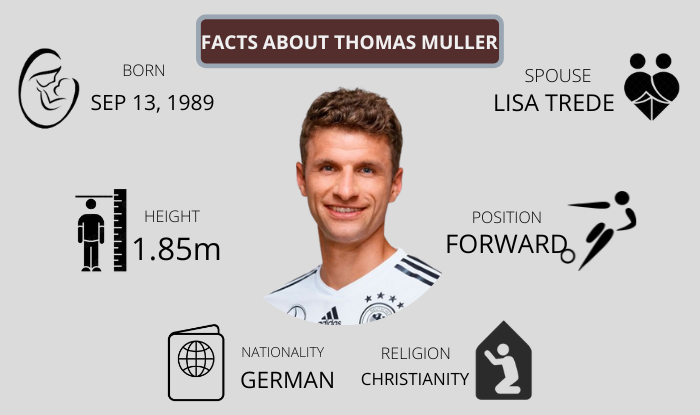 Thomas Muller, a German professional soccer player who competes for Bundesliga club Bayern Munich and the German national team, was born on September 13, 1989. Thomas is a multi-skilled player who can play either up front or in midfield.

He does not only play as a second striker, but he can also play as an attacking midfielder and right winger. He is well known for his precise positioning. The talented player is known for his technique, superb dribbling ability, and deft passing talent.

Müller’s parents welcomed him into the world in Weilheim, Oberbayern, West Germany. He grew up in Pähl, a community close to his birthplace. Thomas spent his childhood years growing up alongside his younger brother. He has spent more time working out by himself. He put in a lot of effort and was capable of things the other kids weren’t.

Thomas began playing with TSV Pahl at age ten and later joined the neighborhood Bundesliga team Bayern Munich in 2000. Pahl had 165 goals in one of the seasons, and Müller scored 120 goals.

He progressed through the youth system, and in 2007 he came in second place in the Under-19 Bundesliga. In March 2008, he scored his first goal while playing for the reserve squad against SpVgg Unterhaching.

Mother: Kladia Müller is the name of his mother.

Siblings: Müller has a sibling named Simon who is 2.5 years younger than him.

Spouse and children: Müller tied the knot with Lisa Trede, a farm worker, and semi-professional equestrian, in December 2009, following a two-year engagement.

Thomas Müller was an acolyte in a catholic church and is catholic. He believes that Christian traditions are valuable for society. Like most Bavarians, he respects and values tradition.

Muller is one of the team’s top performers who receive Audi cars from the club. His luxurious car collection includes Tesla Model 3, Audi A5 Sportback, Audi RS6, Audi A3, and Audi RS Q3.

Does Thomas Muller have a horse?

Thomas Müller’s wife is a professional horseback rider, and the player assists his wife with her horses. Muller is pleased to spend time with his animals and supports his wife when she competes. Lisa competed at the CHIO in Aachen and rode one of their horses to a 12th-place finish in the dressage.

In 2017, Müller raised an incredible £175,000 for children who had lost their parents. This kind deed was done in cooperation with the nonprofit group Young Wings.

Thomas Müller made his debut on August 15, 2008, when he replaced Miroslav Klose for the final 10 minutes of the match against Hamburger SV.

Joachim Löw, the head coach of Germany, called him for an international friendly on March 3. He debuted against Argentina as Toni Kroos’ replacement in a 1-0 defeat for Germany.

He later made three appearances in the campaign. On March 10, 2009, Thomas debuted for Champions League when Bastian Schweinsteiger was replaced by him in the 72nd minute against Sporting CP.

Muller, at age 10, participated in the TSV Pähl youth system in 1993. Before transferring to Bayern Munich in 2000, he played there for seven seasons. He excelled through the younger divisions before facing Jürgen Klinsmann in his first competitive match.

When he participated in domestic league games during the 2009–10 season, Louis Van Gaal made the most of him. In August 2012, Muller scored his first Bundesliga goal of the year against SpVgg Greuther Furth.

What is Thomas Muller known for?

Müller has a very prosperous worldwide career. At the World Cup in South Africa, where Germany came in third, he was the finest young player of the tournament. He also won the Golden Boot award for his five goals and three assists.

Thomas Müller’s net worth is $22 million in 2022. He also makes a lot from his endorsement deals with several brands.