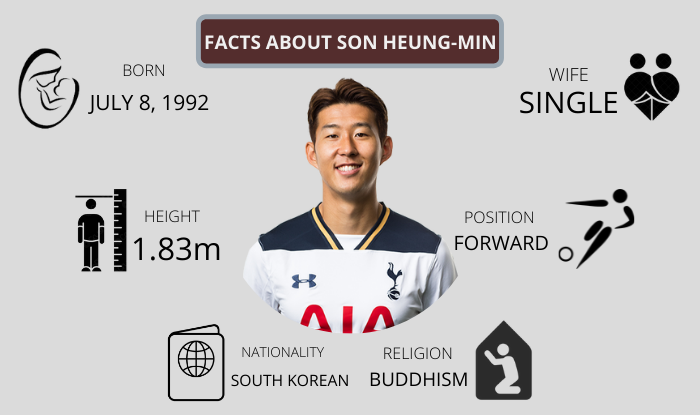 After joining Tottenham Hotspur in 2015, he spent most of his career time for the Premier League club till now. According to the latest sources in 2022, Son Heung-min’s net worth is estimated at around $22 million.

Son Heung-min was born on 8 July 1992 in Chuncheon, South Korea. He is from a football supporting family, his father is a retired footballer who later became a manager. In his childhood, Son decided to play the world’s most popular sport professionally.

Son started playing street football in his hometown and later enrolled in FC Seoul academy. According to him, apart from being a professional footballer he always wanted to get success in European football leagues. For this, he learned other European languages too.

In 2013 Bayer Leverkusen confirmed Son’s transfer for €10 million which was the highest transfer fee in the club’s history at that time. Son was talented enough to justify that expensive transfer.

In the 2015-16 season, Son Heung-min joined Premier League club Tottenham Hotspur. Here starts the journey of success and achievements. He joined the club for a €30 million contract for five years making him the most expensive Asian footballer in history.

Son has dated the K-pop singers Bang Min-ah and Yoo So-young. Currently, he is not dating or he has not revealed any relationship details. Most probably he is single.

He has got a golden and kind heart, he donated around £100,000 to the victims of the Goseong Fire in his native South Korea in 2019.

What is Son Heung-min Religion?

According to sources, Son Heung-min’s religion is Buddhism.

What is Son Heung-min Nationality?

Son’s nationality is South Korean which is his birthplace and he plays for the South Korean national football team.