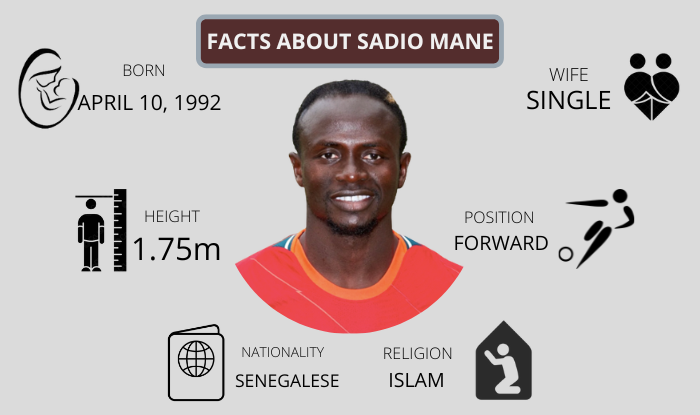 “I knew I was going to be a football player; I just didn’t know how?” (Sadio Mane)

Dreams are one thing, but turning them into reality is another. If you are a dreamer and want to pursue your dreams, this young football player is no less than a motivation for you.

Who is Sadio Mane?

Sadio Mane is one of the top football players in the world. He adored playing football when he was a child. His dream was to be a footballer. His parents forbade him because they thought football would never lead him anywhere. He currently ranks among the most decorated football players because of his dedication and consistency.

He made his dream come true. Sadio realized early on that being the leader in oneself was the most important thing. If you want to take the lead, get inspired by Sadio’s life journey.

Sadio Mane was born in Bambali, a small village in the city of Sédhiou, Senegalese. He was born on April 10, 1992. Mane’s parents could not nurture him because they already had many children. He resided with his uncle’s family. Mane had to work hard since childhood as he endured a poverty-stricken childhood. He fled from his home to pursue his dreams because his parents had not encouraged his desire to play football.

Father: He passed away when Sadio was seven years old Sadio does not discuss his father in the media.

Mother: Her name is Satou Toure.

Girlfriend: Melissa Reddy was his rumored girlfriend. She is a South African journalist. Mane is not married.

He belongs to a Muslim family that includes Muslim Imams or prayer saints. Mane’s father was an Imam Masjid.

Mane earns a handsome amount of money from his profession. The Senegalese star enjoys driving expensive cars. In his chic garage, he has an insane collection of pricey vehicles. He owns a Mercedes G63 AMG, Bentley Continental GT, Audi RS7, and Range Rover Evoque.

Sadio lives in Allerton, South Liverpool. He owns a luxurious house that is worth $2 million. He purchased this house in 2016. Thieves broke into his home twice in November 2017 and February 2019. He was playing in Champions League matches both times.

“I’ll have nuts with yogurt and fruit, sometimes it is eggs with bread, and sometimes it is porridge,”  Sadio said in an interview. It demonstrates that he follows a strict diet that only includes wholesome foods.

Sadio had a poor background. He knows the hardships of poverty. He donates a good amount of his earnings to charitable causes and aids the needy and the impoverished. Mane built a hospital in his community with a school and a stadium.

Mane decided to pursue his career in football after watching his country’s national team performance in the 2002 World Cup.

He was one of the three Premier League Golden Boot winners in season 2018-19, scoring 22 goals.

Mane’s estimated Net Worth in 2022 is 27 million pounds. His current market value is 85 million pounds. According to his deal with Liverpool, his annual earning is £5.2 million. Mane’s agreement with Bayern Munich FC will boost his net worth in the future.

“I remember always having a ball in my foot. That’s how it all started for me. We played on the road.” (Sadio Mane)