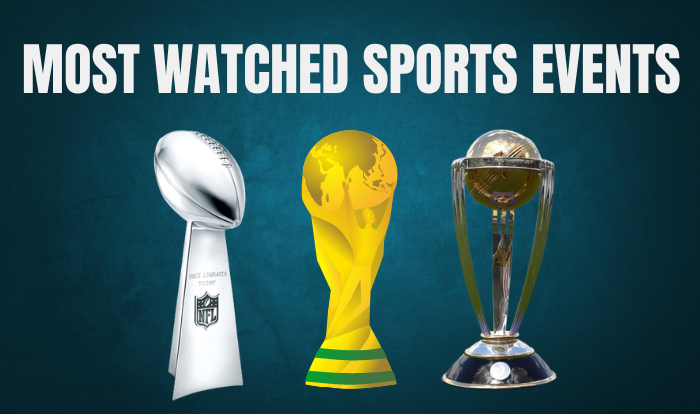 Sports are now one of the vital parts of our lives. It won’t be wrong if I say it is now one of the biggest industries in the world. Millions of people worldwide are attached professionally to different sports.

Professional sportspersons earn a high standard of living from their profession. Even some of the richest athletes have billions of dollars in net worth.

We have written an article about the most popular sports in the world which indicates that there are billions of sports fans worldwide.

Top 10 Most Watched Sports Events in The World 2022

In every sport, there are some big rivalries that are watched worldwide by fans who are not regular viewers. They just watch and enjoy these classes of big rivalries which is why sports advertisers notice a huge spike in the graph of viewers during such matches.

In the modern era, it is very easy to identify which is the most watched event in the world. The views of any event clearly tell about the popularity of the event.

Here we have ranked ten of the most-watched sports events on the basis of their media presence and the number of viewers of that event. These famous sports events are:

The shocking number of viewers of these sports clearly says how viewers of sports are emerging worldwide. Let’s have some details about all these popular events.

NFL is the most popular sport in America. It is watched mostly in North America, especially in the United States. Super Bowl is the final playoff game of the NFL that is played manually to determine the League’s champion of every season.

As NFL is the most watched league in the United States, its final gets more views from the country and also from other countries of the world. The previous viewership history reaches near about a hundred million viewers.

An increase in the number of viewers is expected in the next super bowl because of its fame which is increasing day by day.

Boxing is one of the oldest sports on the planet. It has millions of fans all over the world. It is ranked one of the most popular sports in the world because some fights are watched by millions of viewers worldwide.

Floyd Mayweather V Manny Pacquiao in 2015 was the most watched ever match that has been watched by more than 900 million people worldwide.

More viewers mean more revenue, boxing is a high revenue-generating sport that is also paying very high to professionals. Some boxers are listed among the richest athletes in the world.

Soccer is the most watched and played sport in the world. Millions of professionals are attached to the incredible sport. It has more professional leagues than any other sport.

The last women’s world cup was watched by more than 1.3 billion people worldwide. It is a 32-team tournament that is initially played by teams by dividing into groups and knockouts in the next stage.

Another soccer-related event on the list, El classic is a term that is used for a match between two of the biggest football rivals, FC Barcelona and Real Madrid of the Spanish La Liga.

Because football has billions of fans on the planet, so every big event is watched by billions. El Classico’s history tells it has been watched by 1.2 billion people.

After the departure of the two big football rivals Cristiano Ronaldo and Lionel Messi, football fans somehow lost their interest in the El Classico. This was the reason there is a significant decrease in the viewers of the event after Ronaldo and Messi’s departure from La Liga.

After passing the knockout stages two of the 32 teams reach in final and this becomes the most exciting moment for football fans. A 1.7 billion viewership has been recorded in the UEFA Champions League finals.

Winter and Summer Olympics are the two big sports events. As the name suggests, the winter Olympics is a multi-sport event that is held every four years for sports that are played on ice or snow.

Athletes from all over the world take part in the mega sports event. Some of the popular winter sports are alpine skiing, ice hockey, Speed skating, etc.

The last viewership history shows the mega event has more than 2 billion viewers on the planet. It includes some of the most popular sports in the world such as basketball, boxing, and football.

We have been researching and suffering on the internet before including the name of Tour de France on the list of most watched sports events. Finally, we got some sources that indicate that it has more than 2.4 billion views on record.

The Tour de France is a men’s multiple-stage bicycle race that is held annually. The tour is primarily held in France but it also passes through some other countries. The tour is consist of different stages.

Let’s move towards the 2nd most watched sports event in the world. If you are a reader from Asia then you might have predicted it before, but it can be surprising for readers from other parts of the world where cricket is not as famous as in Asia.

Cricket is a team sport that is played with a bat and a ball like a baseball. It has billions of fans across the planet. The Cricket world cup is the biggest event of the sport that is held once every four years in the ODI division and every year in the T20 division.

Cricket is the most popular sport in Asia which is the biggest continent on earth. This can be one of the reasons of its billions of views.

You might have predicted earlier which sport can be at the top of the list. Obviously, soccer is the most popular sport in the world and its big events have views for billions.

A chance of a significant increase in the number of viewers is predicted for the FIFA world cup 2022 in Qatar. The event is considered the most profitable sports event in the world.

Which is the Watched Sports Event in the World?

Without any near competitor, the FIFA world cup is the most-watched sports event in the world. It has more than 4 billion viewers on the planet.

Every sport has its own fanbase, none the sport is bad for its fans and professionals. Some sports attract fans more and they are easy to understand that is why kids start playing them in the streets and this is how it gets fame.

The FIFA world cup is the biggest sports event in the world that is held once in every four years.