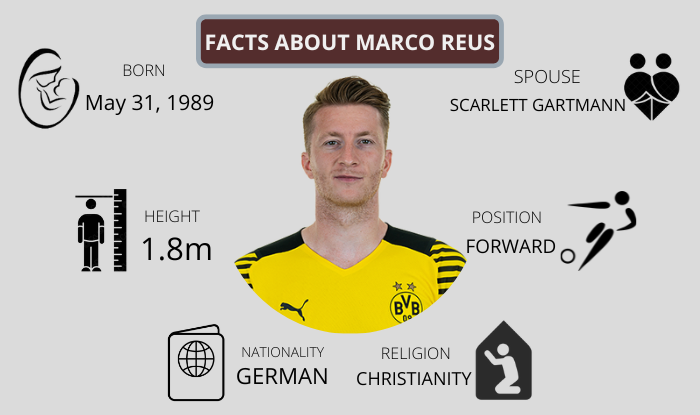 Marco Reus (born on May 31, 1989) is a German professional soccer player who can play as an attacking midfielder or forward. He represents the Germany national team while also playing for Bundesliga club Borussia Dortmund.

Reus is renowned for his quickness and ease of positional adjustment. Marco has a moniker, Woody, after the animated character Woody Woodpecker.

Marco Reus was born in Dortmund, West Germany, and came from a middle-class British-Russian household. Thomas Reus, his father, is English but was born and raised in Germany. Despite having Russian ancestry, Manuela Reus, his mother, was reared in Germany.

Reus spent all of his leisure time as a kid playing football. He has had a deep love for football since his childhood.  His parents decided to maximize his potential after instantly recognizing his love of football.  Reus’ parents encouraged his intense passion for football by assisting him in joining numerous local football clubs when he was only four years old. He began his club career with Post SV Dortmund and started to receive praise from youth coaches shortly. His parents then enrolled him with “Borussia Dortmund.”

Siblings: He has two elder sisters, Yvonne and Melanie.

Spouse and children:    Marco Reus had a relationship with Carolin Bohs, a Germann TV host. They broke up in 2013. In December 2015, Reus began dating German model Scarlett Gartmann. In March 2019, they welcomed their first child together. They later got married in the same year.

Marco Reus is a quick player who is also quite technical and capable of making a pinpoint pass. He puts in a lot of effort and works well in formations that point up aggressive pressing and counterattacking. He has fast dribbling speed and can outduel opponents one on one. Marco possesses a wide range of talents. His dribbling skills are among his best traits.

He started out playing football for the local squad Post SV Dortmund. In 2006, he began playing senior football professionally, and from that point until 2009, he stayed with Rot Weiss Ahlen. He joined “Borussia Mönchengladbach” in 2009. Reus played in the German Bundesliga. On August 11, 2009, he participated in his first game for the German under-21 team. He represented Germany internationally for the first time in 2011 and was named “Footballer of the Year” in 2012. With “Borussia Dortmund,” he won “Player of the Year” in the 2013–2014 season. Bloomberg listed him as the fourth-best footballer in Europe in 2013.

He is currently playing for the German Bundesliga club Borussia Dortmund. Mario Götze left the number 11 shirt for Reus when he joined. Reus now dons it. Reus has more than 150 goals for Dortmund and has helped the team win three DFL-Super cups and the DFB-Pokal in 2017 and 2021. He has received three Bundesliga Player of the Season awards. Reus has only made 44 international appearances for Germany’s national team due to his ongoing injuries.

The German forward has managed to amass a sizable fortune. Marco Reus presently has a $20 million net worth. His transfer value right now ranges from €13M to €21M. His most recent move was from Dortmund to Borussia M’gladbach in 2012.