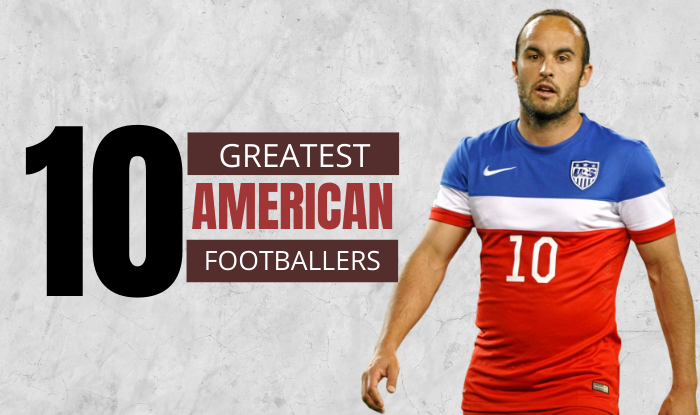 Who are the greatest American soccer players? Today we are going to explore ten of the best ever soccer players in the United States history. Though some of them got the glory of their career other than the American soil they always represented their country.

Soccer is the most popular sport in the world and also one of the most-watched sports in the United States. Many popular soccer players got their fame in other countries’ leagues. This is because of the different formats of the game. Some of the most popular football leagues such as the Champions League, La Liga, and English Premier League have football players from all over the world.

Let’s find out the ten great players in American soccer.

Starting the list with a great midfielder, Michael Bradley is one of the highest-capped American soccer players. He also captained the United States national soccer team formerly.

Bradley started his professional club career with MetroStars in 2004. Before moving to his current club in 2014 he has been representing many European football clubs. The amazing midfielder has played more than 220 games for Toronto FC.

The former soccer player and commentator, Cobi Jones comes next to decorate the list of the greatest American soccer players in history. He played for different teams during his professional career as a player. Cobi Jones spent most of his career time with the MLS club LA Galaxy.

Jones made more than 300 appearances for the club. he played for the US national soccer team from 1992 to 2004. After ending up his career as a player, he is now an analyst for the MLS club LA Galaxy.

Pulisic plays as an attacking midfielder or winger for the United States national soccer team and one of the most popular Premier League football clubs Chelsea FC.

The young Pulisic has managed to admire himself by other players and fans, he is nicknamed ”Captain America” because of his style of play and nationality.

Another great American midfielder who got fame in the European land, Tab Ramos has played for different football teams in Spain, Mexico, and the United States.

Tab Ramos is a former American professional soccer player who ended up his professional career as a player in 2000. After his retirement, he managed different teams including the US national team as an assistant manager.

Brian McBride is another American former professional soccer player who is considered one of the greatest American soccer players in history.

McBride is one of the all-time highest goal scorers for the US national soccer team. He played as a forward for Columbus Crew, Fulham, and Chicago Fire. He made 95 appearances for the US team and scored 30 goals.

One of the best defenders ever came in the history of the United States soccer team, Eddie Pope is also placed among the greatest American soccer players ever.

Pope spent all of his career playing in Major Lague Soccer where he played 143 matches for D.C. United. He was famous for his powerful shots and great sprints during his professional career.

The former American goalkeeper Brad Friedel is considered one of the best soccer players in US history. He represented his national team in the FIFA world cup tournament.

After his retirement, Brad Friedel started his coaching career. He ended up his professional career as a player in 2015 when he played his last match for the English Premier League’s club Tottenham Hotspur. Friedel played 82 matches for the United States.

Here we are now among the top three greatest American soccer players in history. Tim Haward is ranked third on the list. He played as a goalkeeper for the United States national soccer team.

Tim Howard played 121 matches for the United States. He was the MLS goalkeeper of the year in 2001. Howard played for Manchester United and Everton FC in the Premier League.

One of the greatest forwards United States ever had, Clint Dempsey is the 2nd greatest soccer player in American history. He played 141 matches for the national team and scored 57 goals.

Dempsey’s profile is well decorated with some of the iconic soccer awards. His individual achievements are:

Landon Donovan tops the list of the greatest American soccer players in history. He is officially the best soccer player according to a pool taken by ESPN. He has represented the United States at the youth and senior levels.

Landon Donovan played 157 matches for the national US soccer team and scored 57 goals. He was U.S. Soccer Young Athlete of the Year in 2000. Donovan’s wall is full of many other iconic titles, awards, and achievements. The only thing that is enough to describe him is, that he is the greatest soccer player in American history.