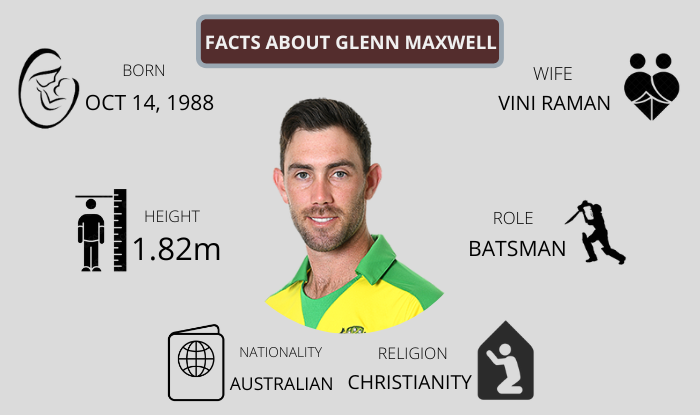 Currently, among the most terrific batsmen is Glenn Maxwell, who was born on October 14, 1988. He has played some of the most spectacular innings of his life throughout his career. No one can level up to his performance in Twenty20 as well as in his splendid One-Day International (ODI) career. He is the most popular athlete and highest-paid player as well as a recipient of many prestigious awards right now.

On October 14, 1988, Glenn James Maxwell was born in Kew, Victoria, Australia to parents Neil and Joy Maxwell. Daniel Maxwell is his older brother. Maxwell’s father, a coach on the local cricket field, greatly influenced his interest in the sport. He began playing junior cricket for the Victorian “South Belgrave Cricket Club” at an early age. He had to bat left-handed in primary school since the other guys could not bowl him out because he’s too skillful.

Australia’s all-rounder is Glenn Maxwell. Right-handed off-break bowling and powerful batting are Maxwell’s trademarks. Maxwell now maintains the record for most victories over Australia in matches.

His half-century against Tasmania in 2010–11, the quickest fifty in Australian one-day national history, made him famous for Victoria. He then took that skill to the global level and scored a 51-ball century against Sri Lanka at the SCG during the 2015 World Cup, the second-fastest score in Tournament History and the quickest for Australia in ODIs. Maxwell entered the top 10 of the ICC one-day international batting rankings in the early months of 2015. He is the first batsman to score a hundred in his opening T20 game. Maxwell currently ranks third in terms of runs scored with 255 runs in seven Test matches with a strike rate of 153.61 and two fifty-plus scores.

Maxwell may be unorthodox, but that would be an injustice. He advanced through all the divisions classically, and in the Ryobi Cup, as a 22-year-old newcomer, he smashed his way to the quickest fifty in domestic One-Day history. He also holds several records and numerous “Man of the Match” honors. Prior to every game, Maxwell regains his form and confidence, which are warning flags for the opposition. Australia has an excellent chance of making it to glory if maxwell has a strong tournament.

He now competes for Melbourne Stars in the Australian Twenty20 league, Lancashire County Cricket Club in English domestic cricket, and Victoria in the first cricket.

His relationship with Australian journalist and television host Candice Wyatt made headlines in 2017, but they broke up a year later. He got engaged to Vini Raman in a customary Indian ceremony in Melbourne on March 13, 2020. Later in March 2022, Maxwell married his longtime partner Vini Raman.

Maxwell, though, is rightfully referred to as “The Big Show.” Despite the fact that Maxwell himself dislikes the label and has stated a desire to be released from the title, however, his teammates and the media have seized upon it. Maxwell also has a rather strong temper, but it rarely shows. He once struck a trash can out of rage after becoming irate after getting disqualified in a Champions League T20 (CLT20) 2014 match. He later apologized on Twitter.

Sachin Tendulkar, Adam Gilchrist, and Shane Warne are some of his favorite cricket players. In Australia, India, and other nations, Glenn Maxwell is one of the most well-liked and financially successful athletes.