Who are the ten best forwards or strikers in the world right now?

Forward is the most prominent position in soccer because they are a position where every team member tries to forward the ball to them. What they do next is important. Sometimes a little mistake leads to a big loss. If a forward misses a clear chance then he has to face criticism from football fans and management. 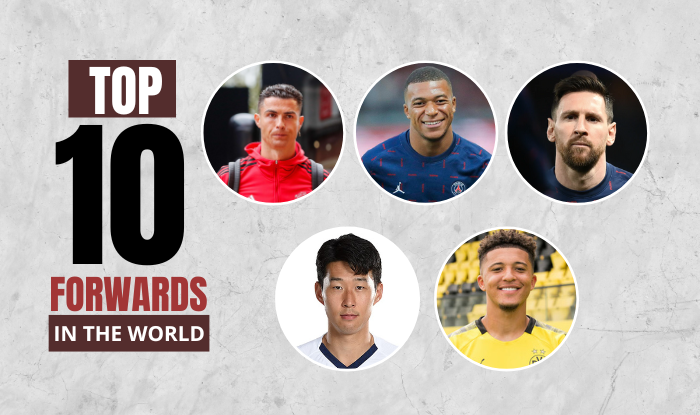 On the other hand, when they score, they celebrate together with fans and other team members. The list below contains ten of the most celebrated and greatest forwards in the world.

Portuguese forward Cristiano Ronaldo is the most famous and followed person on the planet. He has more than 700 million fans all over the world. All this is because of his extraordinary talent and greatness in the game.

It is very difficult to differentiate in many football rankings whether Messi should be at the top or Cristiano Ronaldo. Both are great footballers ever the planet has seen. Messi is the highest golden shoe and Balon Dor winner in the world.

Lionel Messi is the 2nd most popular athlete in the world, he is followed by more than 500 million people on different social media. A number of iconic football titles and awards are decorated in Messi’s trophy room.

The young talent of France, Kylian Mbappe is not coming slow. He is considered one of the fast-fame-getting footballers who has impressed the world very soon with his great football skills and achievements.

Mbappe is ranked third among the best forwards in the world right now. He currently plays for PSG which is one of the most valuable football clubs in the world.

Brazilian forward Neymar Jr is also one of the most celebrated footballers in the world. The stylish PSG forward has been attracting football fans with his excellent skills and goals. There is a decline in his popularity over the last some years. This can be because of his absence from many important games due to injuries.

Neymar also got very rapid fame even from the start of his professional career. Neymar currently plays for PSG with two other great forwards, Lionel Messi and Mbappe.

The greatest footballer Egypt ever produced, Mo Salah is a growing legend. He has a great and accurate passing a scoring ability. Salah currently plays for Liverpool FC and has played a vital role in many big successes for the club.

The Egyptian striker got very fast fame in the Premier League for some years. He is called a ”scoring machine” by many football legends. Salah is one of the most respected personalities in his country.

The rising star of Norway, Erling Haaland is a very fast-rising sun in the world of football. He is a young talented and very excellent forward. Haaland is placed at sixth number on the list of best forwards in the world.

The Manchester City forward is expected to further go up among the top three of the list. His transfer to Manchester City was one of the most exciting transfers in football history. Haaland’s career till now indicates his successful future.

Robert Lewandowski is one of the best football players in the world. He currently plays for FC Barcelona and Poland’s national football team. Lewandowski spent most of his career at Bayern Munich which is a popular German football club.

Lewandowski has a great ability to score goals from long range. His career is full of many wonderful goals and winning celebrations. The great forward scored 238 goals for Bayern Munich in 253 games.

According to many football experts and fans, Son Heung-min is the most underrated footballer in the world. He is not being awarded by the football world the much that he deserves. Heung-min is currently one of the best forwards in the world.

The South Korean forward currently plays for Premier League club Tottenham Hotspur. He joined the club in 2015 and scored 93 goals the club in 232 games for the club till the end of the 2021-22 season.

After seeing many young footballers on the list of best football strikers, I am happy about the future of football where we can expect enjoyable games from these football players. Marcus Rashford is one of them, he is a young talented, and skillful footballer from England.

Rashford has already started amusing football fans with his beautiful goals. Unfortunately, he is playing in a squad where many forwards are in action which is why he always remained a second choice. We hope for his presence in the starting eleven in the next season.

Jadon Sancho is also a young and fast-growing talent in the football world. He is a great forward in the squad of Manchester United and the English football team.

Sancho joined Manchester United in 2021 with the hope of contributing some great stuff to the football world. Jadon Sancho is the tenth on the list of best forwards in the world right now.