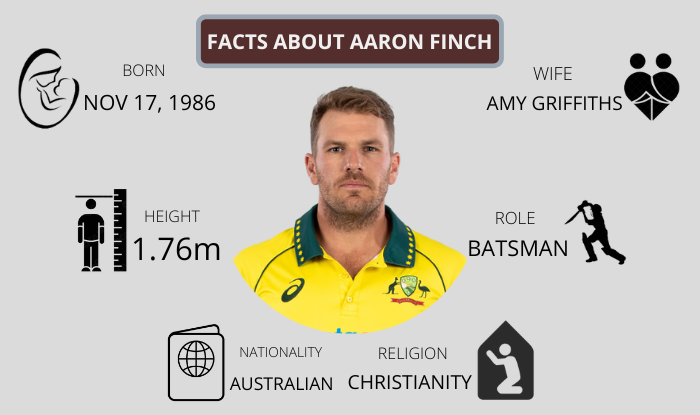 Australia’s well-organized One-day international captain, Aaron Finch through which Australia got its first victory in the world cup. Finch started as a middle-order batsman but was often used as a floater and batted higher in the order for his club team. With his outstanding performance in a T-20I match against England and the highest individual T-20I score ever, he cemented his place in history. He is one of the best Australian openers ever.

Gary Finch and Sue Finch were Aaron’s parents. Jess Finch is his sister, while Mat Finch is his brother. Aaron Finch, who was born on November 17, 1986, has loved playing cricket since he was a young boy. As a result of thinking about turning his passion into a career, Aaron Finch began playing cricket as a wicket-keeper in the cricket club. Moreover, his father was also a significant influence on his career because he was the one who encouraged him to choose cricket over Australian Football.

He was given the chance to play cricket against Sri Lanka at the 2006 Under-19 World Cup, where he excelled and captured the attention of the selectors.

Aaron Finch made his debut for Australia against England in a 20-over match on January 12, 2011, scoring 15 not out.

By performing brilliantly, Aaron Finch improved his batting, gained a spot in the ODI game, and began to dominate the opposing team. And afterward, through his batting, he produced a series of records. . By making a brilliant 172 against Zimbabwe in 2018, Aaron Finch recorded his best individual score. By scoring 135 against the England squad, he made a strong start to his World Cup 2015 campaign and was also named Man of the Match. He is a sought-after talent in several T-20 leagues throughout the world and possibly one of the most prized T-20 players.

He was a member of the Australian World Cup-winning team in 2015, which overcame New Zealand to win the illustrious competition. Finch is the 29th Australian player to play in 100 one-day international contests for his team. He accomplished the milestone in March 2019 when competing against India at Hyderabad’s “Rajiv Gandhi International Stadium.” For the 2019 “Cricket World Cup,” he was selected captain of Australia’s one-day international team.

He holds the record for the third-fastest T20 century, which was scored in 47 balls. A significant turning point in his career was his outstanding performance in the Champions League T20 competition. Currently, one of the most potent strikers in cricket is Aaron Finch. Together with David Warner, the 35-year-old creates a lethal combination at the top because both players are capable of crushing any attack.

The estimated net worth of Australian cricketer Aaron Finch is $25 million. He presently earns $2 million annually, making him one of Australia’s top-paid cricket players. His overall earnings in 2021 will be $4 million, and his anticipated earnings from cricket and endorsements in 2022 would be around $6 million. Brands naturally want to link Finch to their product, paying him millions for endorsement and advertising. Aaron Finch’s net worth is significantly influenced by endorsements.

Amy Griffith and Aaron Finch got married in 2018. They have a daughter named Esther. Although little is known about the couple’s dating history, it is believed that they dated for a very long time before getting engaged in 2016 while traveling to India for a match.

He enjoys playing PlayStation 4 games a lot, and his wife frequently teases him online for playing too many video games. Finch posts frequently about his travels and his skills on social media, where he is a moderately active user.